(ABC 6 News) — Attitude and effort. Those are two words the Mayo Spartan football team abides by.

Last season the Spartans were a buzzsaw in southeast Minnesota football — averaging 40.27 PPG with an average margin of victory 29 points — more than 4 touchdowns. But in the end, they came up short in the state tournament quarterfinals to Mahtomedi 42 to 20.

Mayo enters this season razor-focused with an offense that can easily put points on the board and play tricks on the eyes.

“We have so many different packages that we can run and everything,” senior running back Tore Pappenfus said. “It’s just nice to have different options and misdirection and stuff because it’s better than just the simple offense. Hopefully, it leads to more wins, more yards, and more points.”

The Spartans tout a two-headed monster at running back in senior Tore Pappenfus and Lebron See-Stadstad. 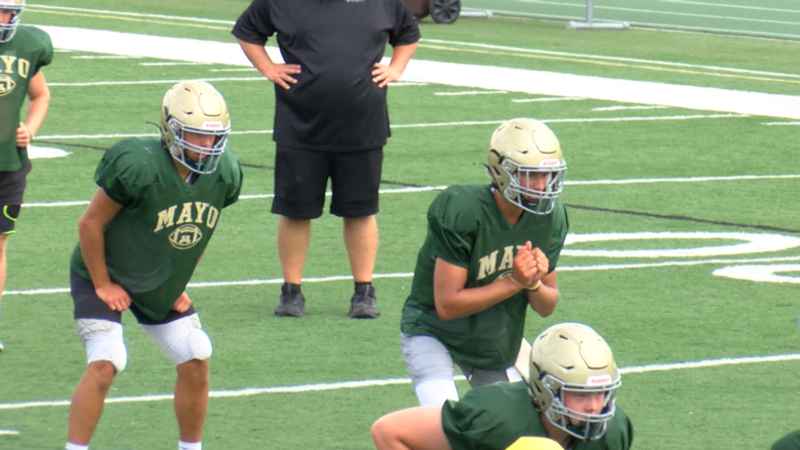 Taking over the starting quarterback spot this year is Reese Grimsrud. The junior has big shoes to fill after Bennett Ellsworth threw for 2,444 yards with 26 touchdowns to just six interceptions. Grimsrud will leave it to how the game falls to see if his stats measure up to his predecessor — but his focus is primarily on making a deeper run in the state tournament.
“It’d be awesome to get back there and for me personally it’s just doing anything I can to help the team and playing my best so we can perform the best,” Grimsrud said. “He’s done a real nice job of picking up leadership and maturity and learning from mistakes,” head coach Donny Holcomb said.

The Spartans practice almost as hard and intense as the likeness of their mascot. Holcomb says if the Spartans want to push through and win the championship — it takes a good offseason and he likes how his guys have come together as a team.: