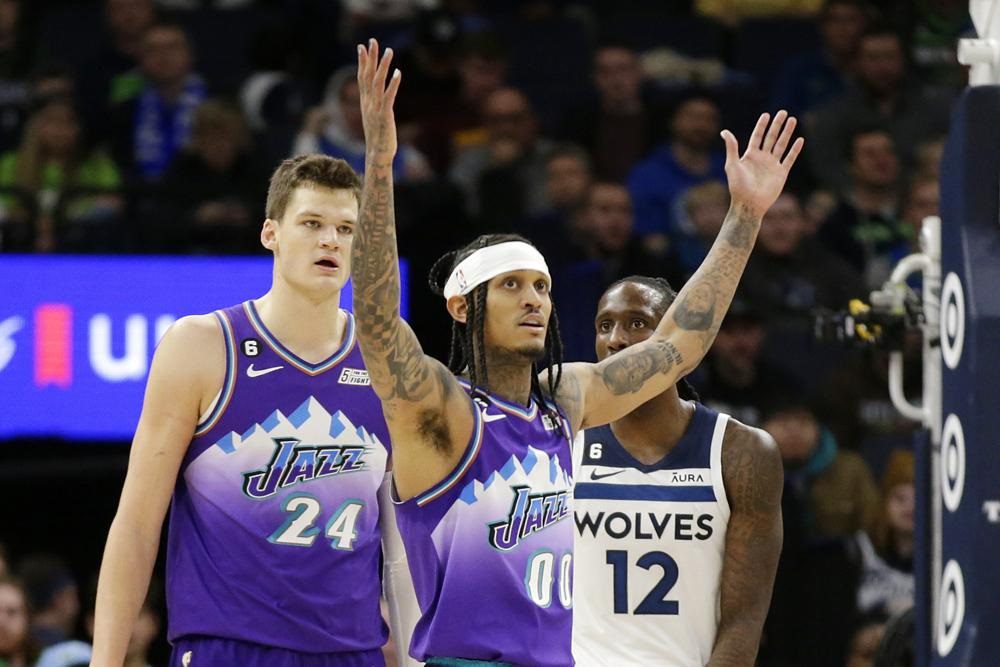 MINNEAPOLIS (AP) — Walker Kessler had career-highs of 20 points and 21 rebounds, Jordan Clarkson added 21 points and the Utah Jazz rallied from a 10-point deficit in the fourth quarter to beat the Minnesota Timberwolves 126-125 on Monday.

Collin Sexton added 19 points off the bench for Utah, which had seven players score in double-digits in its third win in four games.

“I was only here for like two days, but those guys were nothing but polite to me,” Kessler said of being traded from the Timberwolves to the Jazz in July. “My grandad and my dad are from Minnesota. I’ve got some extended family here I’m going to go say hey to, but it was fun. It was a lot of fun to play here.”

Anthony Edwards scored 17 of his 29 points in the third quarter and D’Angelo Russell added 21 points for Minnesota, which struggled inside against Kessler, the 7-foot-1, 245-pound rookie center.

Kyle Anderson had 13 points, 11 rebounds and 10 assists for the Timberwolves, who lost Rudy Gobert to lingering groin soreness early in the game.

“The story of the game was on offense and ability to finish around the paint,” Minnesota coach Chris Finch said. “I think we were, let’s see here, 28 for 52 in the paint. That’s a lot of misses in the paint. And not all of them were because of great defense. We missed a lot of easy ones.”

Russell tied the game at 125 with 13.5 seconds left. Clarkson made one of two free throws for the winning margin, and Jaden McDaniels’ 3-point attempt at the buzzer missed the mark after a pass from Edwards.

“I beat him going right and I saw Jaden wide open in the corner,” Edwards said. “He shoots those, he makes those shots. I see him work on them all day in practice. If I had another chance to throw it to him, I’d throw it to him again.”

Minnesota acquired Kessler, the Naismith defensive player of the year in 2022 for Auburn, in a draft night trade. Two weeks later, he was sent to Utah as the Timberwolves sought a difference-maker down low in Gobert.

Monday, it was Kessler demonstrating his ability to affect opponents inside. He started his fourth game in a row in place of Kelly Olynyk and is averaging 13.5 points, 13.25 rebounds and three blocks in the four games.

“He’s shown so much growth on both ends of the floor, but I think defense probably comes natural to Walker in a lot of ways,” Jazz coach Will Hardy said of Kessler. “His ability to learn on the fly on the offensive end has just been tremendous.”

Gobert’s transition to Minnesota hasn’t been smooth, but he has begun to become more effective defensively as the Wolves have put together their recent run of success.

Edwards has been the offensive equivalent to Gobert on the defensive end.

After Utah took a lead midway through the third quarter, Edwards answered. Minnesota went on an 18-8 run to end the third, with Edwards scoring nine.

On three straight possessions, Edwards went right at Kessler at the hoop, getting a pair of free throws and two lay-ins.