Rescue dogs are being adopted, then returned days later

(ABC 6 News) – Midnight, Barnabee, and Zoe are three dogs who have recently been adopted and returned to Paws and Claws Humane Society in Rochester, MN.

Currently, the shelter has six dogs that have repeatedly been adopted, then later returned.

ABC 6 News sat down with a volunteer to discuss why this is happening.

“Maybe people assume they’re going to adopt this perfect animal who’s trained and gets along with everybody and every animal and a lot of times that’s not the case,” said volunteer Hannah Christenson.

Generally, it takes three days in a home for a dog to decompress from a shelter environment, three weeks to settle in, then three months to learn their new owner’s routine. 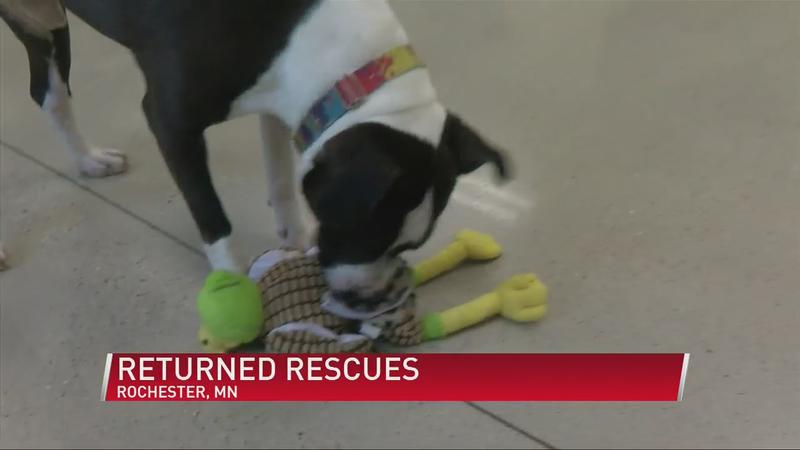 “A lot of times when we see a dog come back it’s within a month and sometimes we see it within a day,” Christenson said.

If you’re thinking of adopting a dog, make sure you’re prepared to put in time and effort to care for your new family member as they adjust to a new environment. Christenson suggests, “You might need to take a couple of days off of work, you might need to adopt when you have a week off because it’s not going to happen overnight.”

But, with dogs who have been adopted and returned numerous times, trust issues and anxiety can develop.

When a dog becomes used to being returned to a shelter, “They become more callous to people,” Christenson said. “Obviously it’s just protection. Why wouldn’t they be? It’s just like a human.”

Some dogs may not have an understanding of what a caring and loving home looks like. For example, Barnabee, a 7-year-old Shih Tzu who was released from a breeder has never lived in a home. “He was returned unfortunately after one day because he’s so shy, and he is. But, he’s never been in a home so he needs to learn what it’s like to be a dog whos loved and cared for like every dog should be,” said Christenson.

Depending on prior experiences in a home, a dog might become more closed off to other dogs or people of certain genders. Such as Midnight, due to bad personal experiences, he has a difficult time being around men. Midnight has been at PCHS on and off for eight months, which is considered a long stay.

Then there are dogs like Zoe, she has also been adopted and returned numerous times. Zoe has been through four homes, resulting in anxiety and stress, which can often result in behaviors like chewing.

Anxiety and stress are common traits in rescue dogs, but can easily be treated with lots of exercise or medication from a vet. PCHS also wants to make sure that new paw parents know they’re not alone.

“We have really good resources here, we want to work with you through that and recommend what we can instead of leaving you on your own,” said Christenson.

While these stories can be heartbreaking, Christenson says, sometimes the most difficult journies reap the best rewards. “For these vulnerable beings who don’t have a voice, if we can be an advocate for them, even in the sad, it’s really rewarding,” she said. “For every dog that goes out the door, it’s a win.”

If you’d like to help these dogs, PCHS is always accepting donations, volunteers, and those who are willing to adopt.