(ABC 6 News) – In what cannabis advocates are calling a surprise move by Republican lawmakers, edibles containing THC are now legal in Minnesota. Cannabis advocates say this is a step towards legalization because THC is the compound found in hemp that has psychoactive properties.

For some, it is long overdue.

"It’s taken a while for Minnesota to catch up with a lot of the rest of the country," said Marie Grace, a Rochester resident.

"It’s about time that Minnesota started to be as progressive as it has pretended to be for so many years," added Jack Evans, also from Rochester. 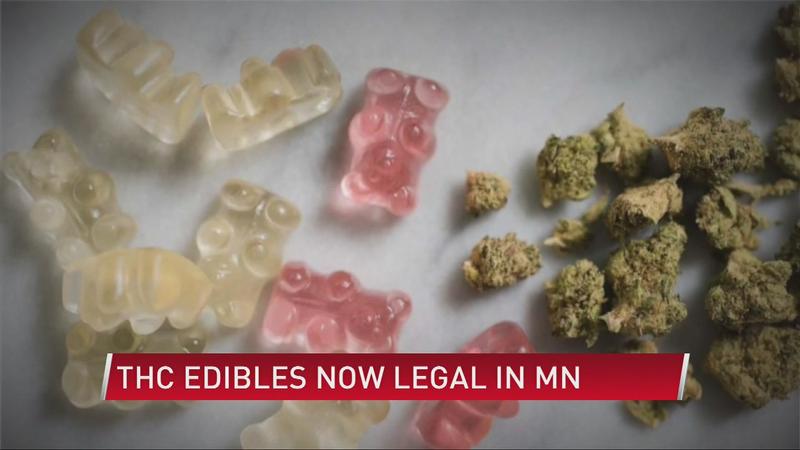 "I would be a little concerned with the availability to minors. School-age children bringing them to the school, and giving it to someone unintentionally," said Ken Cruz.

All cannabinoid products made and sold in the state have to be derived from hemp, a version of cannabis known to be less psychoactive than marijuana.

However, local growers say, that does not mean the product will not get people high.

"We’re literally looking at maybe a version of Colorado-like here. It’s cannabis-derived THC and it obviously can be intoxicating in certain amounts," said Jeff Brinkman, the president of Superior Cannabis Company in Austin.

Edibles and drinks can contain up to 5 mg of THC per serving, and 50 mg per package. That’s about half the standard serving of THC in states where marijuana is legal.

But some feel a bit blindsided by the regulations. The CBD Joint in Rochester said it will take around a week for some hemp stores to get the new, legal product because manufacturers do not usually make edibles with such a low amount of THC.

Any hemp-derived cannabinoid product must-have ingredients and serving sizes on their labels, as well as a statement saying the product does not claim to treat disease.

The product can not be appealing to children and must be sent to a non-state accredited lab for testing.

However, the new law does not place any regulations on how much a consumer can buy.

People in Rochester say they may be ready to try it out.

"Now that it’s legal I might. I don’t see it any different than using alcohol," Grace said.

There are not currently any state regulations on who can make or sell hemp-derived CBD or THC products, but some cannabis retailers do expect licensing to be required in the coming years. The Minnesota Board of Pharmacy released answers to frequently asked questions about the new law here.

ST. PAUL, Minn. (AP) — A new Minnesota law taking effect Friday allows people 21 and older to buy edibles and beverages that contain a limited amount of THC, the ingredient in marijuana that creates a high.

Edibles, like gummies, and beverages can contain up to 5 milligrams of THC per serving and 50 milligrams per package under the law. Five milligrams is about half the standard dose found in recreational marijuana products in other states.

Under the law, new THC products must be derived from legally certified hemp. But, industry experts say 5 milligrams will produce the same effect whether it’s derived from hemp or marijuana, the Star Tribune reported.

“This stuff will get you high, no doubt about it,” said attorney Jason Tarasek, founder of the Minnesota Cannabis Law firm and a board member of the Minnesota Cannabis Association. “Everybody’s calling it hemp-derived THC, which makes it sound like something other than marijuana. But I went on social media and I called it adult-use marijuana, because that’s what most people are going to consider this to be.”

Steven Brown, CEO of Nothing But Hemp, said he will begin selling a dozen new THC products Friday at his six Minnesota retail stores, with a few dozen more rolling out over the next month.

“In some ways, we legalized cannabis,” Brown said.