MINNEAPOLIS (AP) — Gov. Tim Walz asked the Legislature on Tuesday to back a $2.7 billion “local jobs and projects” plan that’s considerably larger than the record package that lawmakers passed two years ago.

The Democratic governor unveiled his wish list at a news conference outside the University of Minnesota’s Institute of Child Development, which is set to reopen in August after a major rebuild funded by the $1.9 billion package approved by the Legislature in 2020.

Walz used the construction site as a backdrop to highlight how 38% of his proposal, or more than $1 billion, is for asset preservation to maintain and upgrade properties that taxpayers already own.

“This is your property,” Walz said. “These are assets that belong to the people of Minnesota.” 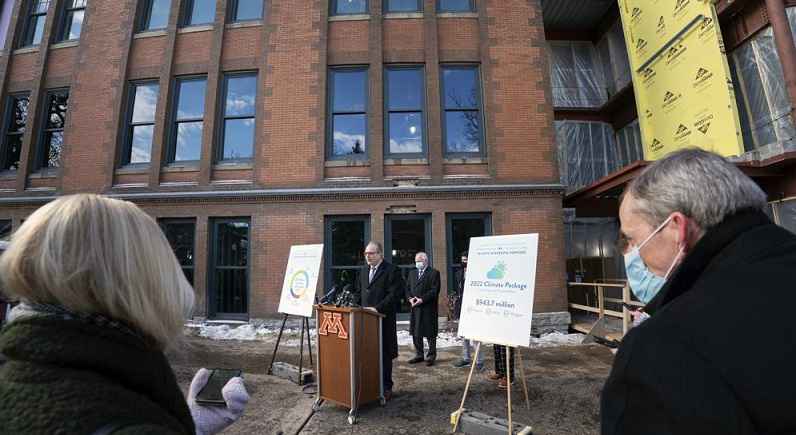 Minnesota Management and Budget Commissioner Jim Schowalter speaks about the bonding proposal, Tuesday, Jan. 18, 2022, in Minneapolis. Gov. Tim Walz and Lt. Gov. Peggy Flanagan toured a construction project at the University of Minnesota where they announced their $2.7 billion plan to bolster infrastructure across Minnesota. (Glen Stubbe/Star Tribune via AP)

Walz is unlikely to get everything he’s seeking from the Legislature, which convenes Jan. 31. His proposal includes $2 billion in general obligation bonds, which require a three-fifths majority in each chamber to pass because they’re backed by the state’s full faith and credit. That means the final package will require at least some votes from the minority party in both the House and Senate. So bipartisan compromises will be essential. His plan also relies on $730 million from other sources, including $276 million in cash from the state’s projected $7.7 billion budget surplus.

Walz said the surplus means Minnesota can afford a big package, and noted that the state’s AAA credit rating will help secure low interest rates. Minnesota got interest rates of 4% to 5% on general obligation bonds that it sold late last year.

Minnesota Management and Budget Commissioner Jim Schowalter said their proposal is “fiscally responsible” because the state can afford to service the debt, so it will preserve the state’s high credit rating. He also said it will help address billions of dollars in deferred maintenance costs before that work gets even more expensive.

Democratic Rep. Fue Lee, of Minneapolis, who chairs the House bonding committee, applauded the governor’s support for housing and equity-focused projects. Walz earmarked $100 million for projects aimed at Black, Native American and other communities of color that often missed out in previous bonding bills.

“In communities throughout Minnesota, there is an immense need for investment in local projects and resources that bring jobs and opportunities to the region, especially when it comes to investing in marginalized Minnesotans and addressing our state’s housing crisis,” Lee said in a statement.

The chairman of the Senate bonding committee, independent Tom Bakk, of Cook, a former Democrat who votes with Republicans on procedural issues, told reporters he hadn’t had time to review the governor’s proposal because his panel is busy visiting 40 proposed project sites this week. Bakk said the governor’s $2.7 billion figure is “way bigger than we’ve ever done.” Bakk said he didn’t have a dollar target in mind, but that his priorities are public safety, asset preservation and deferred maintenance.

University of Minnesota President Joan Gabel joined the governor to express gratitude for the $213 million his package includes for asset preservation and other projects at the university. She highlighted the proposed renovation of the undergraduate chemistry teaching lab on the Minneapolis campus. It still has lab spaces that are “almost unchanged” since the 1930s when the science and teaching methods were very different. So, Gabel said, the antiquated labs put Minnesota students at a “significant disadvantage” to those at other universities.