(ABC 6 News) – Rochester has had local sales tax since the 80s. It was originally used to implement flood control and repair damage. Since then it’s also been used for projects like housing and road construction. On the table this year, however, is extending the .5 percent sales tax into 2040. Most of the Rochester City Council seemed to support the extension in Monday’s meeting. Many want to move forward with the initiative this year, rather than waiting until the tax runs out in 2024. The council needs permission from the state legislature to extend the tax, and submitting the proposal by Jan. 31 means lawmakers could consider the local tax in this next legislative year.

"With all of the limits and complexities of getting the sales tax approved, this is an important tool to diversify our streams of income and reduce the continued pressure we have on our property tax levy," said Councilmember Patrick Keane.

After state approval, the community will vote on what projects to move forward with in the November 2022 general election. There will be up to five projects on the ballot, and voters can pick "yes" or "no" on each of them individually. Some options under consideration include street construction, a housing vitality fund, flood control, and a broad outline for a new community recreation complex.

Some living in the city say they’re willing to keep paying the extra .5 percent if the council is clear about what the money will be used for.

"How is the community of Rochester able to, you know, communicate what they feel is necessary," said Todd Gjervik, a Rochester resident. 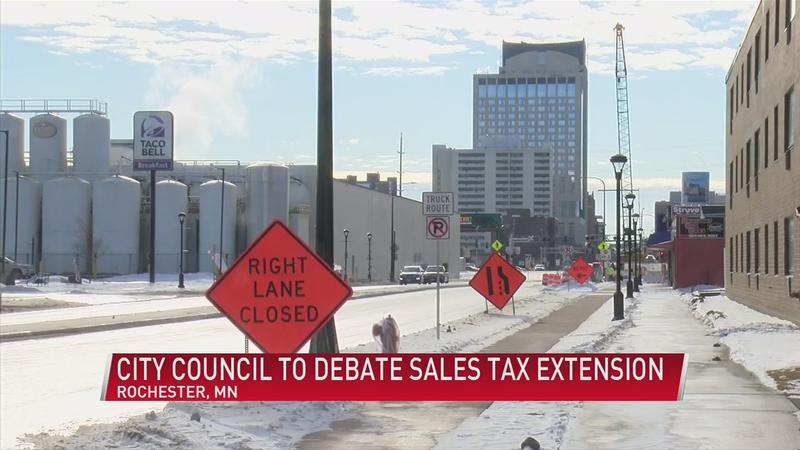 "I also think that community wellness is important. So now that the YMCA is closed, perhaps some money can be devoted towards that," said another resident, Andy Thilges.

However, the swiftly approaching deadline leaves some feeling wary.

"When you give kind of these short deadlines, it creates more of a snap decision versus really something that’s looked at and analyzed," Gjervik said.

The city council will decide whether or not to move forward at their next meeting on Monday. They have to present the state legislature with their plan that same day.