(ABC 6 News) – Lieutenant Brett Boss died a week ago after a battle with cancer.

Boss’ funeral service was held Saturday in Albert Lea followed by a processional that passed through town and ended at the Albert Lea Fire station.

Boss was 38-year-old and was diagnosed with stage 4 Ewing’s Sarcoma back in 2014.

"So many people get into this for the excitement or different things like that. Brett really was one of those that got into it because he cared about people," Capt. Bart Berven with the Albert Lea Fire Department, said.

Boss’ colleagues said he was a very passionate firefighter. 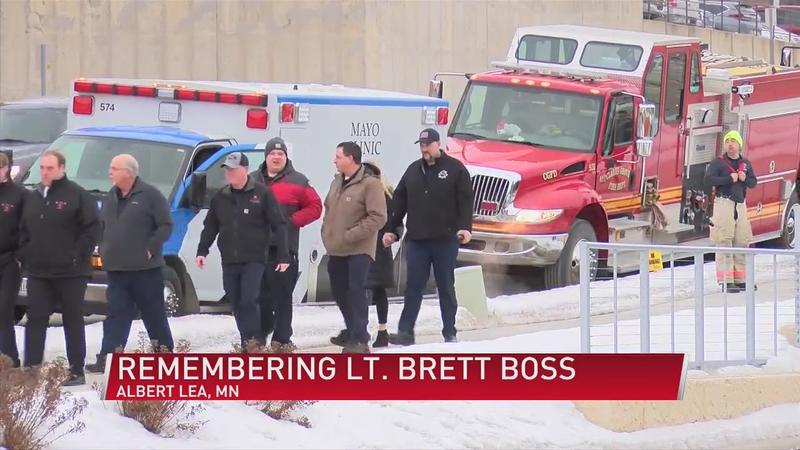 "It meant the world to him that he could help someone no matter how big or small," Berven said.

The support on Saturday wasn’t just from other Minnesota fire departments and law enforcement agencies.

"We had calls all the way from Los Angeles to Washington D.C. and everywhere in between. And it doesn’t matter in these times how big your department is or how small, everyone comes together and it just reinvigorates you and makes you realize that the fire service is unique," Berven said.

"You know there are the dad joke people and there are Brett jokes," Fire Chief Jeff Laskowske with Albert Lea, said.

"We want to keep his memory with us always as we continue through. We want to continue his fight for continued cancer prevention," Laskowske said.

Boss worked with Sen. Amy Klobuchar to create a National Firefighter Registry that studies the link between cancer and firefighters’ exposure to toxic substances.

"One of the coolest things he did was he was part of the Firefighter Cancer Support Network. So when a firefighter was diagnosed with cancer, specifically Ewing’s Sarcoma, if they were diagnosed with that, they would give Brett’s phone number to this person and then he would call them and get together," Laskowske said. "Didn’t matter where they were in the country. If he needed to fly out to go meet up with them, talk with them on the phone, kind of talk them through what was happening, what they needed to look at next."

"On our processional down just seeing the outpouring of the community that came out to support. Most of them probably didn’t even know who Brett was or Brett probably wouldn’t even have known them but they were somebody that he had an effect on by going to a medical call or a fire scene or something. They may not have known him but they knew him," Laskowske added.

"Brett gave 110 percent every day. What he’s left for the rest of us firefighters is we have to carry that legacy and make sure we remember to stay compassionate and caring," Berven said. "I feel lucky getting to know him."