(ABC 6 News) – On Friday, Mower County saw its first early absentee voters for a complicated election day on August 9. Voters in Southern Minnesota have two seperate elections on the ballot.

One is the special general election to fill the District One U.S. House of Representatives seat, after Representative Jim Hagedorn’s death. Voters will choose between Democratic candidate Jeff Ettinger and Republican candidate Brad Finstad. The winner will finish out Hagedorn’s term for the rest of the year.

"This isn’t business as normal for us when it comes to elections. With a straight face I can say, vote for me early and often because there are multiple layers, and levels, and steps in this process," Finstad said.

"Honestly though as a new candidate, new to office, I think it’s kind of a plus. Voters get to know me better and I’ve had more opportunities to get out and listen, and learn from people in the district," Ettinger said of the unique race.

The other election is a primary for November’s general election. This means choosing candidates for offices like state senator, attorney general and secretary of state. 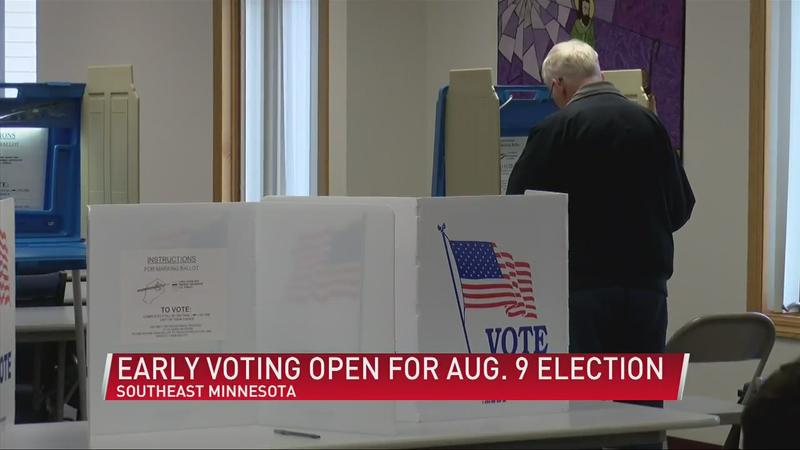 It also means choosing another candidate for U.S. House District One. This time to fill the position for the next two years, starting in 2023.

"If they come to the office, they can fill out the application and get the ballot at the same time and vote in person," said Mower County Auditor Scott Felten.

Ettinger and Finstad are running in that race as well. Voters Friday said that getting out to vote is important because it gives people the chance to have a say in creating policy. These two voters chose to vote early for the flexibility with their work schedules.

"I always like to encourage others to vote so getting out early and having that vote in really gives me that opportunity to tell them — I already voted so what is your decision going to be?" said Bill McLain, an Austin voter.

"It’s exciting I guess to get to have a say about what goes around in Austin, what happens in Minnesota," added Molly Berglund, another Austin voter.

For more information on polling places, visit the Secretary of State’s website here.