(ABC 6 NEWS) – From paid family leave to front-line worker benefits, to checks for Minnesotans, Governor Tim Walz covered it all in his state of the state address.

For only the second time in four years and the first time since the beginning of the pandemic, Governor Tim Walz addressed the full legislature in person.

He also talked about what happened in Taopi when an EF-2 tornado went through the town on April 12.

Gov. Walz honored Taopi Mayor Mary Huntley during the speech. Her mother was there too, right next to her.

“Taopi’s named after a Dakota leader. The name Taopi means wounded in battle, but the man Taopi was known for his strength and resilience. I think I speak for all of us when I speak to the people of our Taopi, while you’re wounded you will heal. Your strength and resilience mayor were on display the gift that you gave to your people is a great example for all of us,” Gov. Walz said.

After the speech, local politicians took some time to reflect on the speech.

Local lawmakers on both sides of the aisle said they appreciated how Governor Walz was very unifying in his address. He spent a lot of time picking out common goals and finding common ground between the GOP and the DFL.

Walz set priorities throughout the speech, starting out with giving Minnesotans back some of that $9.25 billion dollar budget surplus. Suggesting one-time payments, he calls Walz checks. He also mentioned he wants tax cuts for low and middle-class Minnesotans, not the wealthy.

“One of the quickest, surest, and most fiscally responsible ways is to return that money right now if we can do that. But I’ve said it many times and I’ll say it in this body — we can cut taxes for middle-class folks and folks trying to get into the middle class too at the same time,” Gov. Walz said.

He also prioritized repaying the state’s unemployment insurance debt, which was unusually high due to the pandemic. Also, frontline worker bonus pay, saying we are almost at the one-year mark from when the legislature originally decided to dedicate money to first responders.

But, Republican senators for our area senator David Senjem and senator Carla Nelson believe the governor could be doing more to get some of this important legislation passed — criticizing things like Walz checks.

“But here we are with four weeks left — we’re talking about getting going on problems. This is a speech that should’ve been given the first week we were here,” Sen. David Senjem (R) Rochester said.

“This money is not the governor’s money. This money is money that Minnesotans paid. They overpaid,” Sen. Carla Nelson (R) Rochester said.

But democratic representatives appreciated the address. Representatives Liz Boldon and Tina Liebling spend much of their time working on improving access to childcare and healthcare, both of which Walz focused on in his speech.

“Everybody should have the care that they need,” Rep. Liz Boldon (DFL) Rochester said.

"He talked about keeping Minnesotans safe and healthy and that is what I work on as well. So I think those are shared priorities,” Rep. Tina Liebling (DFL) Rochester said.

Another big theme is that lawmakers can agree on what our state’s big issues are like frontline worker pay and public safety, they just don’t agree on how to solve these issues and they’ve got about four weeks left to do it before the session ends on May 23. 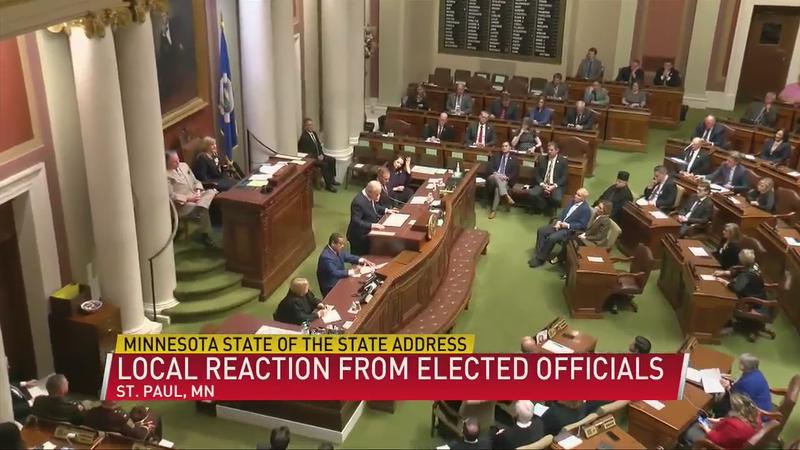