(ABC 6 News) – For a lot of the paramedics in north Iowa there is a number of concerns, especially for one county in Iowa that does not have an ambulance service.

"We’re currently working on trying to get a full-time ambulance service in Worth County we don’t have one right now we rely on first responders and then Mason City Ambulance comes up to take patients from us," said Worth County Supervisor AJ Stone.

He says that it’s been a big issue over the last few years with more and more calls less and less volunteers he says some spots in North Iowa can take up to 30 minutes to get to.

"A lot of time with certain calls their sending the helicopter up because transport quicker, so that’s a big issue with us is transport times getting critical patients to the hospital in a timely fashion," Stone said.

However, there is an even bigger issue than not having an ambulance. 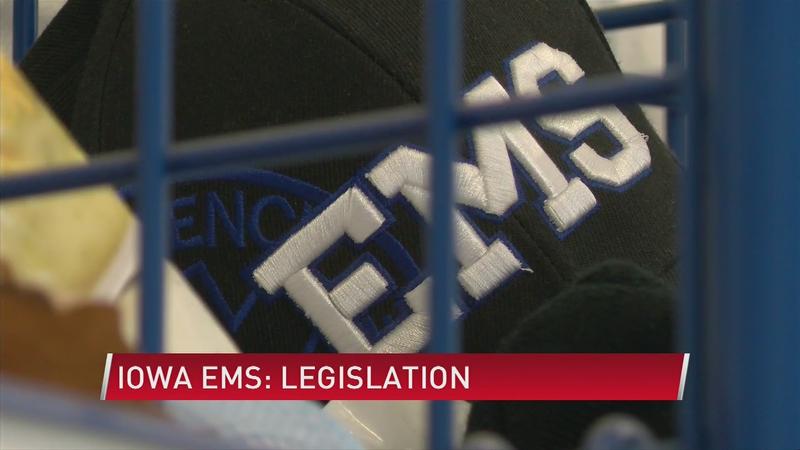 "There’s actually no law out there that says we have to you know we have to send an ambulance," Dale Rayhone, paramedic supervisor, Forest City and Forest City Ambulance.

"I think there’s a misperception in the public that EMS is already an essential service," said Mark Sachen, Iowa EMS Association President.

"It would be great that they would recognize us especially they’ve seen how important we were thru the pandemic," Jennifer Vaske Paramedic, West Hancock Ambulance Service.

They hope the nametag will help bring in some extra funding for these rural departments.

"The second we get a call and the wheels go outside the garage were losing money," Rayhone said.

Without any money from the state, it’s difficult for volunteer departments to keep the doors open. They say donations help, but it is just not enough to support the services.

"You can’t expect ambulance services to function when they are losing money and a lot of that is Medicare Medicaid and in rural communities that’s probably 60 percent of our calls is the elderly community," Rayhone said.

Forest City paramedic supervisor Dale Rayhone says for starters, he would like to see reimbursement rates from Medicare and Medicaid match its operating costs right now every call his staff responds to the expense incurred outweigh the payments whether they are from insurance companies or government programs.

"Sometimes 6 minutes is too long sometimes the patient doesn’t have 6 minutes," Rayhone said.

It is a struggle they have faced for years and it has taken a global pandemic to get the ball rolling. Iowa EMS Association President Mark Sachen says the pandemic has created a renewed interest in both chambers of the House and Senate to reclassify EMS as essential. In June, Iowa Governor Kim Reynolds signed the bill into law allowing counties in Iowa to declare EMS as essential as well as levy taxes on a local level.

"The legislation is pretty clear we can’t tax over what we need we can only tax for the amount that we require so they have to do an annual report on how that money is being spent and why that money is needed uh so that they can sustainably run their service and keep those ambulances in service," Sachen said.

With his assistance, Sachen hopes these heroes can get the help they need to take care of the rest of us.

"I think people are becoming more aware of the importance and really what the state or ems is in Iowa," Sachen said.

"There’s numerous things going on in Worth County right now but one of our primary things is this ambulance service," Stone said.