(ABC 6 News) – The small town of Taopi is still picking up the pieces after Tuesday night’s tornado. Minnesota Gov. Tim Walz visited Taopi on Thursday to assess the damage and talk to tornado victims and city leaders.

"We know this is a county-wide and a region-wide effort," Walz said. "Incidents like this really bring out the best in people."

Walz said he is proud of how quickly Minnesotans came together to help their neighbors.

The Mayor of Taopi, Mary Huntley, said she has been overwhelmed with the number of people pitching in to help their small town.

"To know that the governor was able to come down and listen to people of Taopi, to listen to the first responders and really give them an encouraging word I think it makes them feel really special," State Representative Patricia Mueller said. 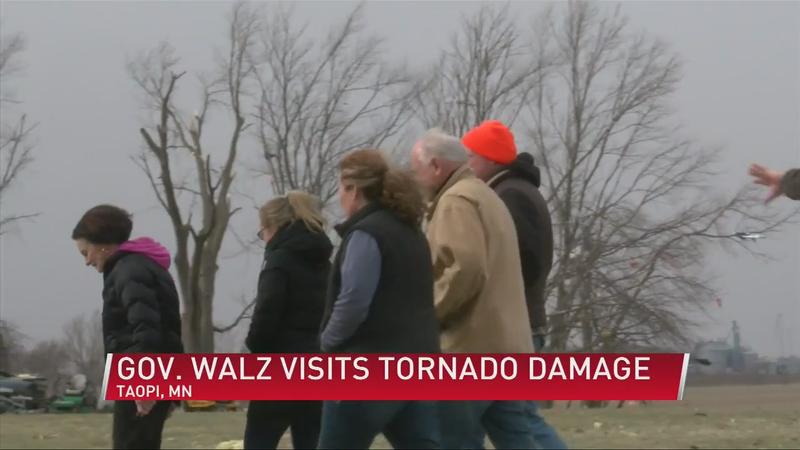 Mueller represents the area Taopi is in but she said she turned up to help not just as an elected official, but as a member of the community.

"It is overwhelming to see the response from the community," she said.

Mueller and her husband put together personal hygiene kits with shampoo, conditioner and towels and brought them to the American Legion in Adams for anyone who needs them.

The Legion has received so many donations it has actually stopped accepting items. Since daybreak Wednesday they’ve gotten nearly 4,000 water bottles, over 200 toothbrushes along with gloves and other gear donated.

"Many of the people who lived in Taopi had lived there all of their lives and this their home," Mueller said.

Walz said he’s taking back what he saw and learned to St. Paul to see what the state can do to help those impacted by the storms.