(ABC 6 News) – Hayfield’s Easton Fritcher has decided to take his baseball talents to the next level, committing to play at the University of Minnesota next year.

Fritcher has loved baseball from a young age.

"It had to be before kindergarten when I just started playing tee-ball and then I just kind of started moving up and just kept playing. I think my love for the game kind of took over," Fritcher said.

His parents, Shannon and Jodi Fritcher, have watched him grow both on and off the field over the years.

"It seems kind of unreal, actually. Super proud of him. It’s been fun watching him grow up over the years and all of the hard work he’s put into it," Easton’s father, Shannon, said. 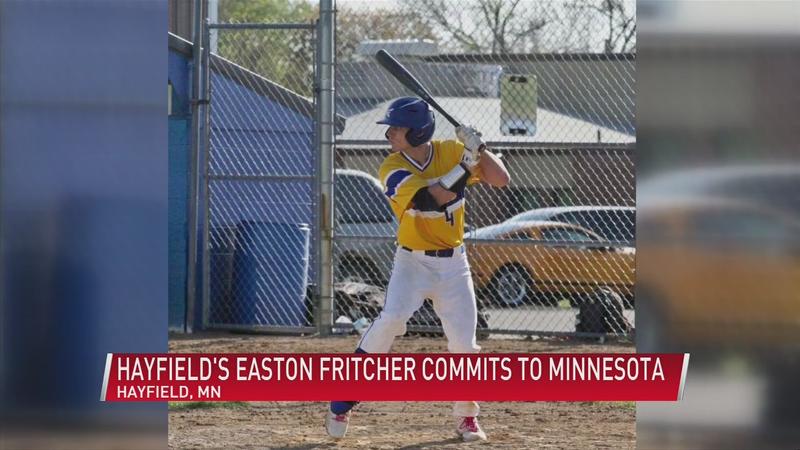 Fritcher is going to Minnesota as a two-way player with the potential to pitch and hit for the Gophers.

"We’d been told for a lot of years at a very young age he has the skills to do it. To us he’s just a kid that loves playing baseball so we didn’t know what to expect," Shannon said.

Fritcher’s teammates say he’s not just a great athlete, but a great friend.

"He’s a great baseball player but he’s also just a great person and you love to see it because he’s not cocky at all, he’s a super humble person and he works super hard, so definitely he’s earned everything that he has," Ethan Slaathaug, a friend a teammate of Fritcher, said.

Fritcher stepped up to the plate in the State Championship in 2019.

"At Target field at the state championship game when we were down 4-0 he just kept that positive attitude. He had that one bad inning of pitching but he didn’t let it control the whole game. He went out and still threw more shutout innings and kind of led us to the ‘W’ there. He just led the way for us I thought in that state championship game," Slaathaug said.

The community of Hayfield is excited that Fritcher has decided to stay close to home so they can continue to watch him play baseball.

"Small town, everybody helps everybody," Shannon said. "Everybody’s family here and I mean these guys have grown up together," Jodi added.

"He puts a lot of time into all of his sports, no matter what sport it is and he goes 110 percent all of the time," Isaiah Tempel, a lifetime friend and teammate of Fritcher, said.

Fritcher’s coaches have also helped him get to this point.

He has one more year left as a Viking and he’s not done just yet.

"The dream is to get to the state championship and win it again but I really just want to compete with my guys one last time. It’s amazing playing for a 1A school, you know playing with the guys, it’s just small, I’m more of a small-town guy," Fritcher said.