(ABC 6 News) – The Brownsdale community is trying to piece together what happened. They spent Sunday afternoon looking at all of the debris and knowing that the Rohler Rink was where people made good memories.

"As a kid, I went there a lot. Just skating around having a good time. We all have good times there, many people do," James Swanson, an Austin resident said.

His mom also has fond memories of the rink.

"At different times of the year, they would have all-night skates, and my kids loved that," Barbara Swanson said.

Another person I spoke to agrees. This was the place to skate. 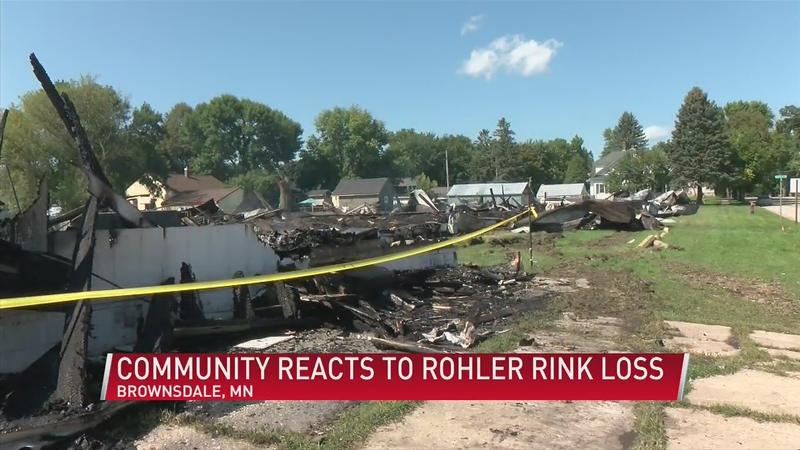 "Roller skating’s a big thing, you just can’t do it anywhere. You gotta have a building. I know I went around it a million times," Kyle Johnson, a Blooming Prairie Resident said.

And the building where those memories were made was gone in a matter of hours.

James Swanson has family that lives in a house steps away from where the Rohler Rink used to be.

He was making food for his family when he saw a bright light, he knew something wasn’t right.

"Looking out, fire going, the first thing you can think of is oh snap, there’s a fire going. It was a great place to go." James Swanson said.

His mom agrees, Barbara was shocked when she saw how bad the fire got, but knew fire crews did what they had to do to put out the fire.

"It’s heartbreaking but I’m so grateful we had so many fire departments and volunteer fire people coming in and helping us out with it," Barbara Swanson said.

As of Sunday, the cause of the fire is still unknown. The community saying this place truly was something special.

As the Brownsdale community remembers the good old days, they’re also dealing with the reality that this fire took something special from them.