A look back at Freeborn County Sheriff Freitag’s Career

He says it has been an honor serving the people of Freeborn County.

"I’ve only done two things in my adult life, United States Army and Freeborn County," Freitag said. The army veteran turned Freeborn County Sheriff is getting ready to hang up his uniform.
After two terms, Freitag announced he is retiring at the end of the year.

"That’s one of the things I’m probably going to miss the most, just the personal interactions with people," he said.

Freitag took office in 2015 and it didn’t take long before he implemented changes as the new leader.

"After that election, I’ve got the personnel that I have, I need to get everyone on the same page and that definitely has been accomplished," Freitag said, "when you build a good team and get people in the right positions and get everyone headed in the right directions, you can’t help but get some of your other goals falling in place."

Some of those goals include courtroom and security checkpoints installed at the law enforcement center, an interoperability system with Iowa, to share critical data with neighboring agencies across the border, and the introduction of body cameras in 2018.

"One of the things that I increased was training, you can’t under train, you just can’t," Freitag said.

That training was vital in 2020 when a gunman opened fire at law enforcement and people from the Shady Oaks apartments. A moment, Freitag says he will never forget. "We had those people get hit from the shooter up on the third floor, you know that’s one of those events that is a very obvious event that shows you, you need equipment."

In his nearly 30-year law enforcement career, there were challenges to wearing a badge and controversies. The 2020 election created tension between the Freeborn County Board of Commissioners and Sheriff Freitag. He appeared in a political ad for then-candidate Jim Hagedorn. The board released a disclaimer denouncing the action.

"We had a talk about what’s it’s going to be about, and he said law and order, I said, I’m your guy," Freitag said.

The tension between the board and Freitag also played out in court in the dispute over his salary. The case went all the way to the Minnesota Supreme Court and in 2021, Freitag won with the court setting his salary at $113,952.

"It’s not about money, that whole thing was about principle and setting things right for the next sheriff," he said.

Freitag says he’s OK walking away from a raise he just received. But before he does, he says his top priority is to recruit new hires and present a full and robust team to the next leader.

"I have never ever seen it like this before, " said Freitag, "no one wants to get into law enforcement, it used to be an honorable fun, exciting career field, you could make someone’s day by helping them out."

Freitag hopes, that whoever comes in, will honor the sheriff’s role and help the department and the law enforcement industry, thrive.

"I’ve just loved this job, I love what it has brought to me, I love what I have been able to do for so many people over the years," Freitag said, "but I know I’m going to love retirement also,"

Freitag’s last day will be December 31, 2022. He says he plans to help his wife at the Freeborn County Animal Humane Society and focus on the small business venture he recently started with his partner. 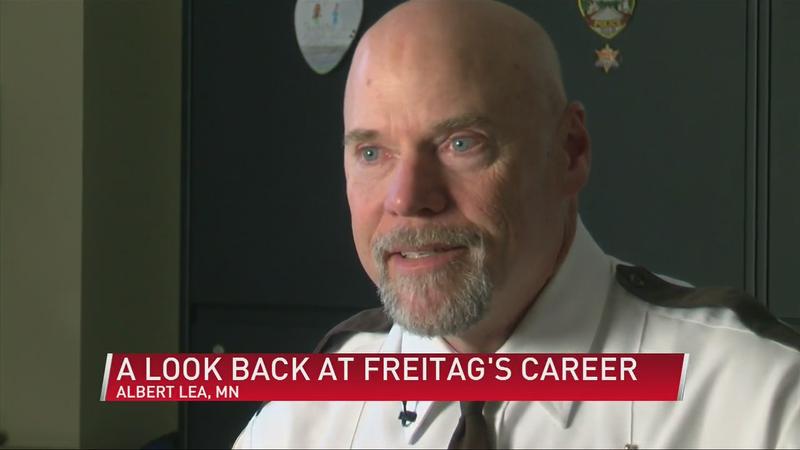