According to the U.S. Department of Justice, Thursday morning, the Drug Enforcement Administration, the Minnesota Bureau of Criminal Apprehension, and the Southeast Minnesota Violent Crime Enforcement Team led a coordinated enforcement action involving more than 60 federal, state, and local law enforcement officers to dismantle a large-scale methamphetamine trafficking conspiracy based in Rochester.

The operation resulted in the arrest of 10 drug traffickers and the seizure of drugs and firearms.

All 10 defendants have been charged in federal court with conspiracy to distribute methamphetamine.

Those arrested Aug. 18 are as follows, according to Lt. Lee Rossman of the Olmsted County Sheriff’s Office:

Three others were in custody at the time of the arrests: Lisa Marie Musolf, Marshall Michael Galbreath, and Aaron Raymond Dombovy. 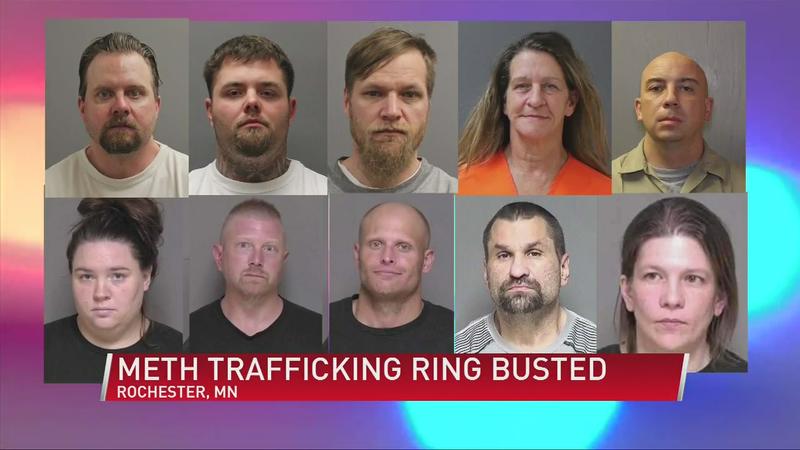 All those involved in the SE MN investigation appeared in federal court Friday, Aug. 19 and face charges of felony conspiracy to distribute methamphetamine.

According to Olmsted County Sheriff Kevin Torgerson, all of the suspects involved have a long history with law enforcement.

"It feels good because we know we’re making a difference today and yesterday, but the other side of it is the addiction doesn’t stop for people out there. This group is ruining people’s lives out there in our community and they need to be held accountable for it," Sheriff Torgerson said.

While the streets of the Med City are a bit cleaner, Sheriff Torgerson says there is still a long ways to go.

"We’re not gonna stop, we’re gonna keep doing this. We realize it’s not the end, that there’s so much more work to be done and we just hope the community is behind us and supports us. If they hear or see difficult things going on like drugs or suspicious activity that they let us know because you never know where it’s gonna lead," Sheriff Torgerson explained.

This was the result of a joint investigation conducted by the FBI, the Bureau of Alcohol, Tobacco, Firearms, and Explosives, the Drug Enforcement Administration, Homeland Security Investigations, the United States Marshals Service, the Minnesota Bureau of Criminal Apprehension, the Olmsted County Sheriff’s Office, the Rochester Police Department, and other law enforcement partners.

In addition, a joint law enforcement operation culminated in the arrest of 15 violent offenders and the seizure of 32 illegal firearms and machine guns in the Twin Cities that involved more than 100 federal, state, and local law enforcement officers, including out-of-state special response teams. All 15 defendants have been charged in federal court.

This is in relation to earlier this year when federal, state and local officials announced a new operation to combat violent crime.

“Violent crime is at an all-time high and the statistics are alarming, but that is only part of the story. The nature of the violence has changed. By their actions, their weapons and their words, violent offenders are displaying an absolute disdain for the law, and a disregard for human life,” said U.S. Attorney Luger. “Criminals are engaging in an appalling level of violence, using militaristic weapons and accessories that not only change the nature of the violence, but also the resulting harm. Several recent cases and the enforcement operations we’re announcing today illustrate our violent crime strategy in action. We are making progress in our efforts to break this violent crime trend, but there is still more work to be done. We will not let up; we owe it to our communities.”