(ABC 6 News) – A search warrant at a Mason City home led to the arrest of a man wanted in connection to a shooting.

At 3:15 p.m. Wednesday, officers executed a search warrant at a house on the 100 block of 8th Street SW in an attempt to locate 27-year-old Kalab Van Scyoc and take him into custody on outstanding arrest warrants.

Authorities say flashbangs and gas were used, and Van Scyoc was eventually found hiding in the attic.

"They went through initially and could not find him. Upon doing multiple subsequent searches they were finally able to find him way up in the attic in the back corner under cellulose insulation with a bandana over his face, hiding," said Mason City Police Department Captain Mike McKelvey.

Police said drugs and drug paraphernalia were also found in the house. 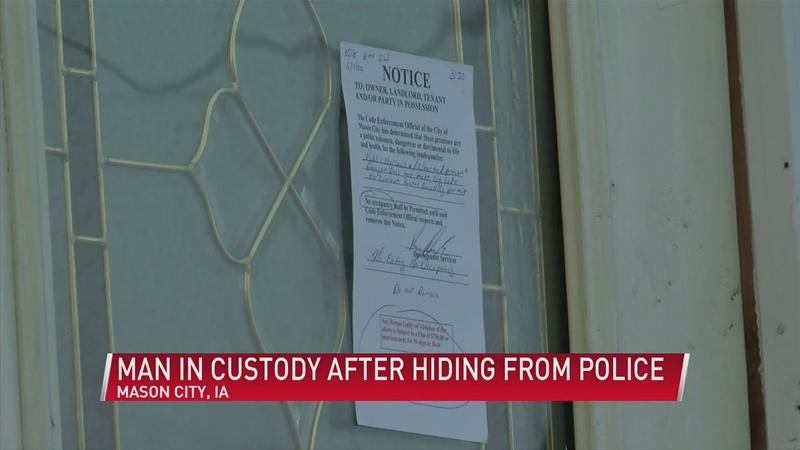 Captain McKelvey also said the house is a rental with only one person listed on the lease, but at least four people are reportedly living there and noted it’s not the first time police have been called there. "Now today’s thing verifies that people were harboring a fugitive, there’s drugs, possibly drugs sales, drug paraphernalia, possibly a weapon, people here not on the lease, just not good stuff. And then the next thing is is this place didn’t pass the rental inspection today when we called the rental inspector because it’s such a disaster inside."

Police say this is an ongoing investigation, but Van Scyoc does face multiple possible charges including reckless use of a firearm, and at this time authorities do not know whether or not the other people at the house will face any charges.

Authorities went to the house as part of an investigation into a shooting that took place Tuesday night. Police said witnesses at the shooting scene provided a description of the suspect, identified as Van Scyoc.

Police said the victim suffered minor injuries and did not require any medical attention.