Vikings face abrupt finish, roster churn after all that fun 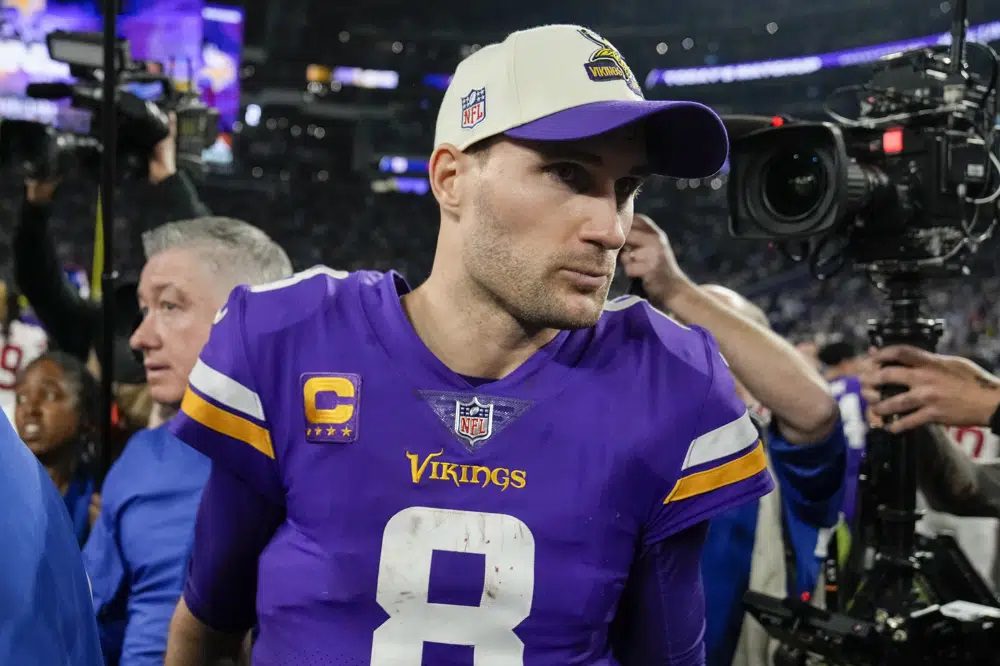 EAGAN, Minn. (AP) — The end hit harder for the Minnesota Vikings than usual, a season of exhilarating finishes and exceeded expectations smudged by this quick exit from the playoffs.

The sting was only deepened by the reality of the roster. The salary cap crunch will likely force the departure of some of the players who contributed heavily to 13 wins, an NFC North division title and a strong chemistry that fueled this run behind new head coach Kevin O’Connell.

“We have such a great group, and you know when the season ends that this group doesn’t stay the same moving forward,” quarterback Kirk Cousins said after the 31-24 loss to the New York Giants at home on Sunday in the first round.

“That’s hard to accept, especially with how many great players are in there.”

There’s always year-to-year turnover in the NFL, but general manager Kwesi Adofo-Mensah and his staff will face an especially difficult round of decisions over the next two months as he and O’Connell enter their second season together.

“This team was pretty close, a lot of good relationships,” safety Harrison Smith said. “We wanted to do more and just didn’t get it done.”

There are weaknesses, particularly on the interior of the offensive line and among the defensive backs, that need more than just the draft to address. That means a restructured contract or two likely won’t cut it. To create space, a valuable player or two will probably have to be cut — perhaps without a clear-cut replacement currently available.

“We did things that a lot of people didn’t think we were going to do from the start of the season. We’re proud about that. Definitely not proud about losing tonight and not being able to go on,” said Justin Jefferson, whose league-leading 1,809 receiving yards led the list of accomplishments. “It’s definitely going to be tough not seeing some of these faces in the locker room next year.”

One of the reasons why the job opened for O’Connell was the recent struggles of a once-dominant defense under his predecessor Mike Zimmer, whose specialty was on that side of the ball. The group slipped even more under defensive coordinator Ed Donatell, putting his status with the team in doubt. There was promise of a productive pass rush with Hunter and Smith on the edges, but in addition to finishing second to last in the league in yards allowed, the Vikings ranked in the bottom third of the NFL in pressure percentage and sack percentage.

With the speedy Brian Asamoah, a third-round draft pick last year, waiting in the wings, Kendricks is the veteran on defense whose return is most in question with the smallest dead-money hit among the group of eight-figure players. Even if the base 3-4 scheme under Donatell didn’t fit Kendricks as well as Zimmer’s 4-3 system, he would be tough to replace.

“Eric has a crazy, crazy ability to know what’s coming,” linebacker Jordan Hicks said. “He’s one of the most talented middle linebackers I’ve ever had the opportunity to play with.”

The environment around team headquarters a year ago was at a low point after a second straight losing season that led to the firing of Zimmer, but the improvement in that area at the direction of the sunny O’Connell is an asset the Vikings can keep for 2023 and doesn’t count against the cap.

Cook is still only 27, but he’s another one whose future is murky by virtue of the undervalued and punishing position he plays entering his seventh NFL season. There’s no guaranteed salary left on his contract, only prorated signing bonus portions that come with about $6.2 million in dead money if he were to be released prior to the start of free agency.

Cook topped 1,000 rushing yards for the fourth straight season, but most importantly he was healthy for all 18 games — the only time in his career he didn’t miss at least three games.

“That’s always been my goal, just to finish with these guys. A lot of games that I didn’t finish a few years ago or whenever it was, it was just on your conscience that I could’ve helped these guys win a game,” Cook said. “Being available all year for these guys, that means a lot to me.”

The Vikings have two more years of contract control over Jefferson at his rookie-deal rate, but he will eligible to sign an extension this offseason. He’s all but certain to set the wide receiver record for richest deal, with more yards through a player’s first three years than anyone in NFL history.

“It’s not really something that I’m really worried about,” Jefferson said. “I want to win a Super Bowl. That’s the thing that I’m most focused on. The money comes with the job.”