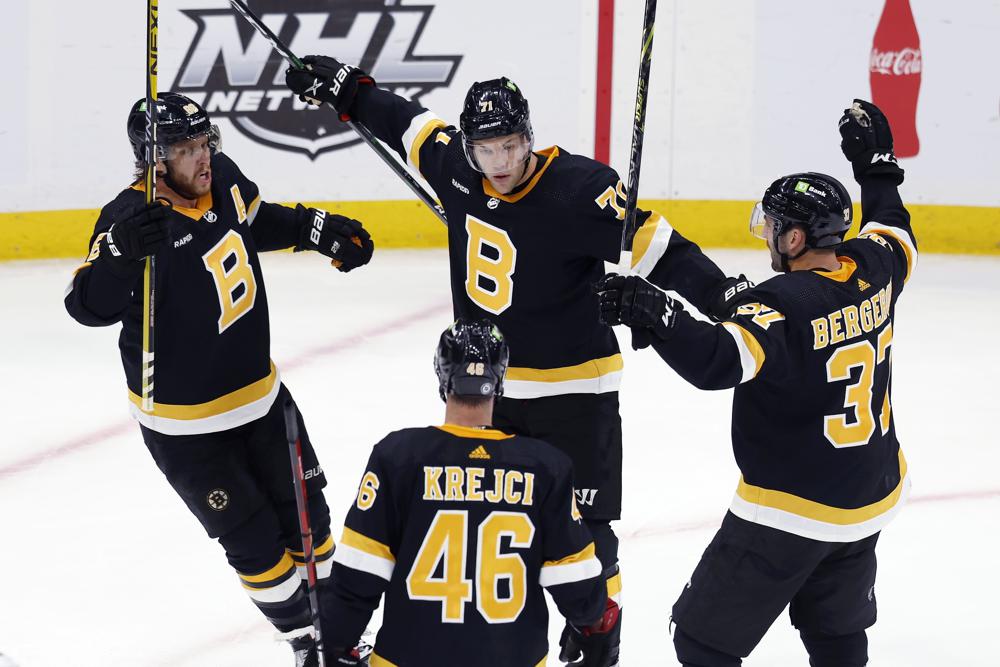 BOSTON (AP) — Taylor Hall scored a power-play goal 4:49 into overtime, and the Boston Bruins beat the Minnesota Wild 4-3 on Saturday.

Hall, who also had two assists, took a crossing pass from David Pastrnak and one-timed a shot past Marc-Andre Fleury, who had stopped eight shots in OT with the Wild playing most of the extra period short-handed.

“You get two opportunities in overtime you’ve got to make do,” Hall said. “It was an amazing play by Pasta. He had the whole rink on the other side and I had the whole net.”

Pastrnak scored his fourth goal of the season and Nick Foligno and Hampus Lindholm also scored for the Bruins, who improved to 5-1-0 under new coach Jim Montgomery and remained unbeaten at home.

“I think we are on the right track. Obviously, there are some small details that we have to work on,” Pastrnak said. “Overall, I think the first six games we’ve made a lot of points and I think there is a lot of positives to be looking at, so I think we are pretty happy. We just need to keep doing the same thing.”

Fleury stopped 39 shots for the Wild, keeping Minnesota close through a lopsided second period and giving the Wild a chance in the third, when Jared Spurgeon tied it at 3 with 4:31 left on a shot from the slot through traffic.

The Wild opened the overtime down a man for 1:22, and then went down a man again after David Krejci drew a tripping call on Kirill Kaprizov. Krejci also had an assist on Hall’s game-winner, and captain Patrice Bergeron made a nice play to keep the puck inside the blue line as the Wild desperately tried to force a shootout.

“I just wish I could have got that last one and see what happens in the shootout,” Fleury said.

Brandon Duhaime and Matt Boldy scored for the Wild, and Mats Zuccarello had two assists.

The Wild were playing their first road game of the season. They dropped to 1-3-1.

Linus Ullmark made 24 saves for Boston, which opened a 3-1 lead on Lindholm’s goal 6:41 into the second.

Boldy appeared to have his second goal with 14:15 left in the third, but it was disallowed after a video review showed him kicking it in with his right skate.

Minnesota had a 5-on-3 advantage for 57 seconds midway through the third but could not get a shot on goal. Connor Clifton ended up with a short-handed breakaway for Boston after clearing the penalty box but Fleury stopped him.

Pastrnak put Boston up 2-1 after Fleury couldn’t control the rebound on a shot by Hall.

Duhaime gave Minnesota an early lead on a short-handed breakaway, outracing two Bruins to the puck following a turnover and beating Ullmark 1:55 into the game.

Boston dominated the first half of the second period, outshooting Minnesota 11-2 and taking a 3-1 lead on a wrist shot by Lindholm from the slot.

Boston had a chance to increase its advantage after Boldy shot the puck into the seats for a delay of game penalty 9:37 into the period. But the Wild shut down the Bruins’ power play and seemed to gain a little momentum, closing to 3-2 when Boldy redirected a pass from Zuccarello into the net with 4:02 left in the second.

Former Bruins captain Zdeno Chara returned for the ceremonial puck drop, which followed a brief video presentation of the defenseman’s career in Boston. Bruins fans cheered throughout, and then roared when the final video clip showed the 6-foot-9 Chara hoisting the Stanley Cup after Boston beat Vancouver in the 2011 final.

Boston D Matt Grzelcyk got his 100th career point with an assist on Lindholm’s goal. … After opening the season with four straight home games, the Wild kicked off a five-game trip. … Fleury, who re-signed with the Wild in the offseason, entered with a 5.96 goals-against average. The Wild placed F Jordan Greenway (upper body) on injured reserve two days after he was hurt early in an overtime win against the Vancouver Canucks.