Newman Catholic BB & SB advance in second round of playoffs

(ABC 6 News) — After severe weather put a slight delay on local Iowa schools sports, all teams were praising the sun on Wednesday.

The Newman Catholic Knights had both its baseball and softball teams at home, the boys hosting Lake Mills while the girls welcomed St. Ansgar.

Knights baseball — already one of the top teams in the state — got to work fast with a 7-0 into the third inning. Pitcher Doug Taylor struck out the side in the top of third, sending A.J. Ramaker, Kane Koch and Brady Hanson back to the dugout in succession.

When Ramaker went to the mound for the Bulldogs, he attempted to catch the Knights’ Jack Maznio off second base in the bottom of the third. However, Ramaker ended up throwing the ball away, allowing Maznio to take third. Maznio didn’t have to wait long before he was able to reach home on a hit, as the Knights slammed the Bulldogs for an 11-1 win in five innings.

Knights softball got off to an excellent start in the top of the first, sending two out of three St. Ansgar Saints out off pop flies. Kinsey Anderson and Kennedy Schiewsow were unable to rattle Knights pitcher Macy Kellar as the Saints’ Emma Hicken was thrown out before she reached first. 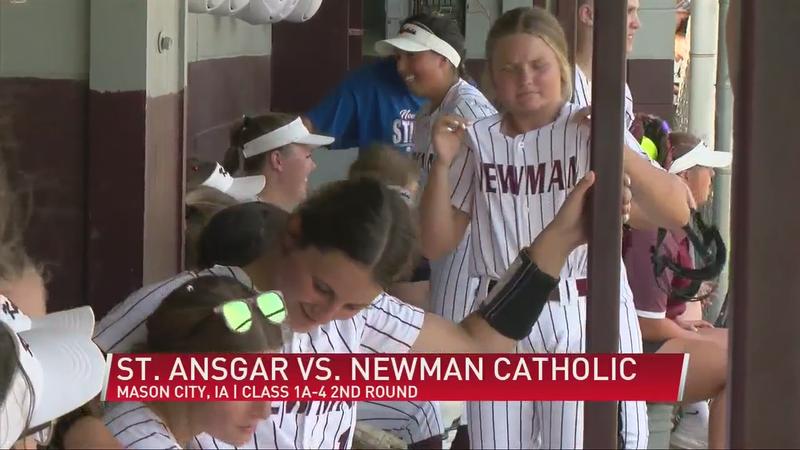 In the bottom of the first with Emily Opstvedt on third, the Knights’ Emma Weiner laid down an excellent bunt, reaching first while Opstvedt raced home for the opening run. Newman Catholic would prevail in this contest as well, advancing in a 5-3 victory.