Woman Runs 50 Races for Boy with Down Syndrome

(ABC 6 News) – Every runner has a goal or a reason they run. Anywhere from proving something to themselves or trying to stay fit.

But what about in honor of a kid from a completely different state?

A woman from Ohio has run a race in 49 states for boy with down syndrome and autism. The last state state to get to 50, right here in Minnesota.

In 2015, Heidi Hammond got connected with the Ray family through a Facebook group called ‘I Run for Michael’ where a person is matched with someone with a disability to run in honor of them.

“It took about three months for us to get matched up. I live in Ohio and he lives in Wisconsin. And so initially I wasn’t running half marathons,” said Heidi. 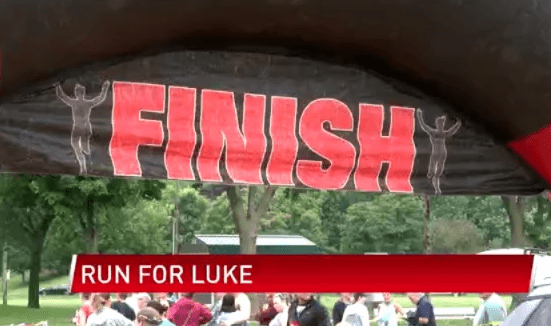 When she began running for Luke she met other runners who gave her the idea further her journey. Heidi said, “so, then I met a group of people that was running the 50 states, and so that became my goal was to run the 50 states.”

Through this journey Heidi has become not only an inspiration, but a member of the Ray family. Brenda, Luke’s mom couldn’t be more thankful for her.

“Having another person out there inspiring to keep on moving cause Luke goes through a lot,” said Brenda. In the past two years Luke has had two hip surgeries. With Heidi providing long distance support from Ohio or where she’s running, Savanna, Luke’s younger sister has had to step up at very young age to help her mom with Luke. But, that’s no problem for her because she loves spending time with her brother.

With Luke’s condition, it’s very hard to for the Rays to travel. Luckily, Heidi and Brenda were able to work out a way to make sure they were their for Heidi’s final race. “She was so kind to think about that. That’s why Minnesota was close enough to Wisconsin. I mean it take a lot of planning on her part,” said Brenda.

But, this race almost didn’t happen. Three weeks ago Heidi contracted COVID, and wasn’t sure if she would recover in time for the race, but thankfully she did.

When Heidi crossed the finish line, Luke Brenda and Savanna were there waiting for her.

“This is just a monumental first goal for me. I’m just thankful it all worked out for my family, for my Wisconsin family to be here for me,” said Heidi.

Completing 50 races in 50 states takes a lot of work, a positive attitude and support from those around you. Which resembles perfectly how the Rays go through everyday life. Brenda said, “Keep making every moment count. I mean that’s what it’s about. And it brings us closer together. It could seem off to others, but we just roll with it.”

After the race today, Brenda talked about dealing with the everyday struggles and how people can help. She said, “Most people don’t know what to say or do. And it’s just asking a simple question, ‘how can I help?’ or just be present to be there and care.”