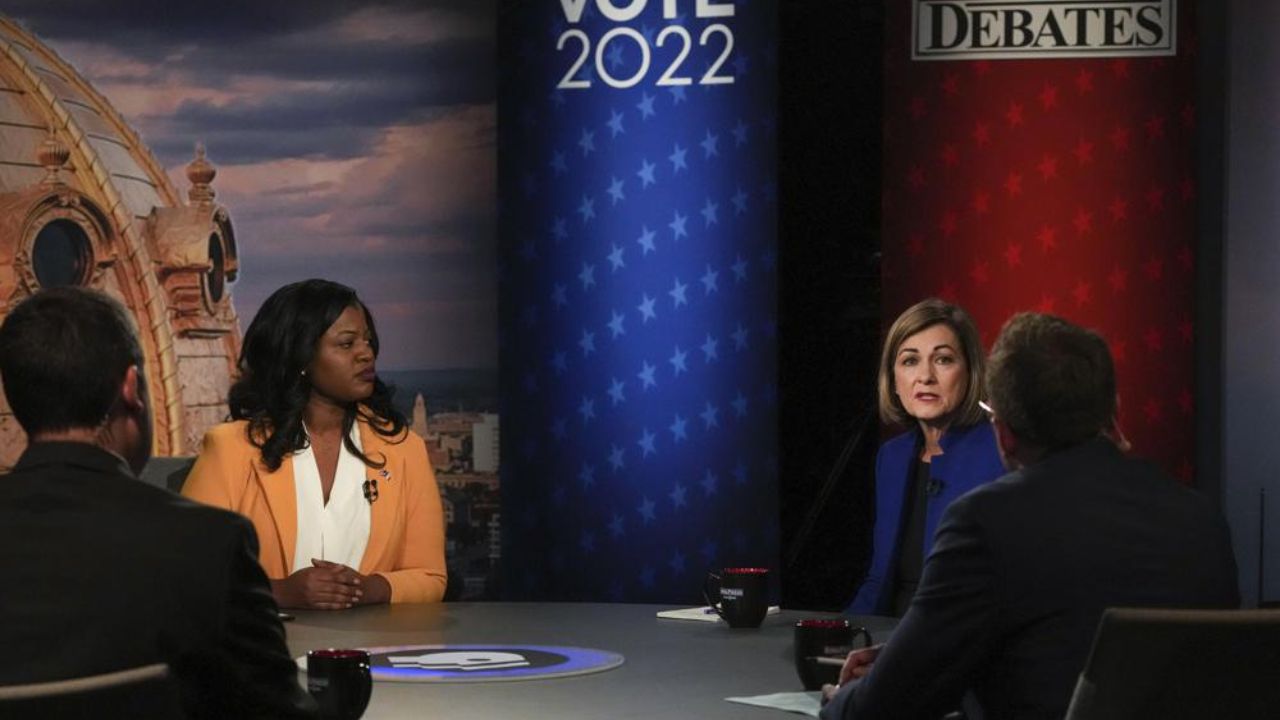 JOHNSTON, Iowa (AP) — Iowa Gov. Kim Reynolds and her Democratic challenger Deidre DeJear clashed on several issues, including abortion policy and school funding on Monday during their only scheduled debate before Election Day.

Reynolds has asked the courts to reverse earlier decisions that halted enforcement of a 2018 law that would block abortions once cardiac activity can be detected, usually around six weeks of pregnancy.

DeJear said politicians have no place when a woman must make difficult decisions about her pregnancy.

“My personal belief has no place in a woman’s doctor’s apointment when she goes into that doctor to make a decision that’s in her best interest,” said DeJear, who favors making abortion rights state law.

Reynolds responded that Democrats favor abortion for “a baby right up until it’s born” when most Iowans and Americans do not believe a woman should be allowed to make that decision.

Abortions in the third trimester are extremely rare and typically occur because of a significant fetal abnormality, experts say.

The candidates met for the debate a day after a Des Moines Register/Mediacom Iowa Poll showed Reynolds holds a double-digit lead as the Republican seeks a second full term in office.

Reynolds was favored by 52% of voters while 35% of voters supported DeJear. Libertarian Rick Stewart had 4% support. The poll surveyed 804 Iowa adults earlier this month. It has a margin of error of plus or minus 3.9 percentage points.

DeJear, 36, is a small business owner and political organizer who ran for secretary of state in 2018, becoming the first Black Iowan to be nominated for a statewide race. She lost to incumbent Paul Pate, a Republican.

Reynolds defended her record of cutting taxes and managing state finances, building up a billion dollar surplus in state funds and repeatedly said she was proud of her record.

DeJear was critical of the Republican controlled-government, saying Reynolds and GOP lawmakers were hoarding cash while underfunding programs, including public schools and mental health services.

The two clashed on school funding with DeJear saying the state should infuse money into public education to return Iowa to top quality education performance while Reynolds continued to push free choice which would allow some taxpayer dollars to be used for parents to send children to private or religious affiliated schools.

Iowans can begin early voting Wednesday for the Nov. 8 election.