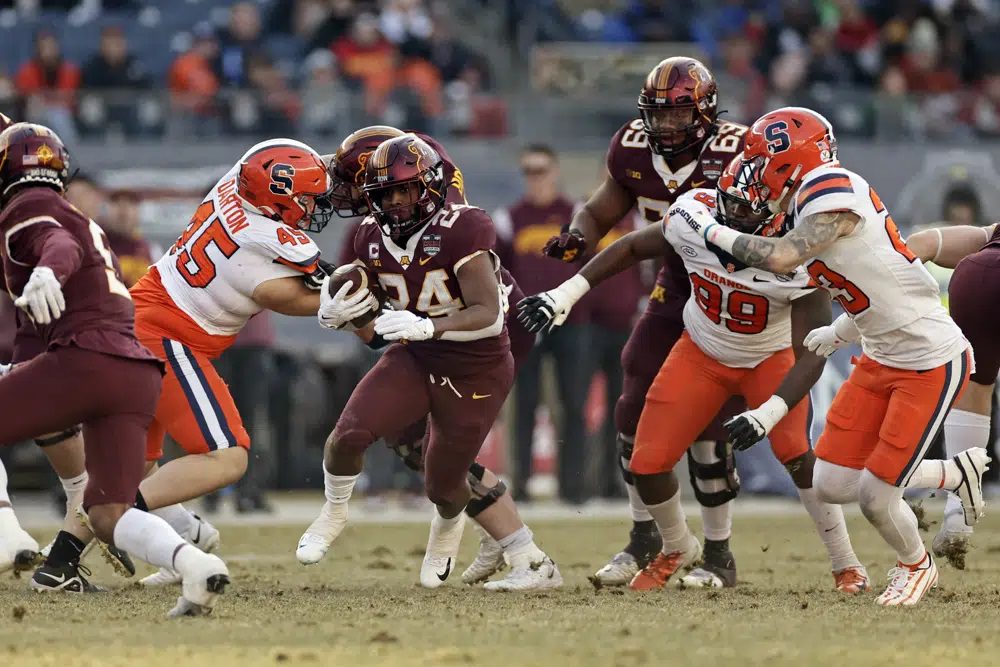 NEW YORK (AP) — Mohamed Ibrahim rushed for 71 yards on 16 carries with a touchdown and became Minnesota’s all-time rushing leader in the Golden Gophers’ 28-20 win over Syracuse in the Pinstripe Bowl at Yankee Stadium on Thursday.

Ibrahim, who missed virtually all of last year with a ruptured Achilles, closed out a solid career in dramatic fashion. After getting injured in the 2021 season opener against Ohio State, Ibrahim returned for a sixth season and finished his career with 4,668 yards and 53 rushing touchdowns in 40 games since joining the Golden Gophers as a two-star recruit from Baltimore.

Ibrahim broke the school record held by Darrell Thompson (4,654 yards from 1986-89) on a 10-yard gain with about 2 1/2 minutes left in the first half. Before breaking the record, Ibrahim scored a gritty 4-yard run with 13:39 remaining in the half before sitting out the final periods. The TD gave him 20 and moved him past Gary Russell (19 in 2005) for the most single-season TDs in school history.

“It’s not something that I circled,” Ibrahim said of the records. “I just took it week by week, just doing my job, executing the game plan and one game lead up to another and it just adds up.”

Ibrahim also set a school record for rushing attempts (320) and finished with the fifth-most rushing TDs in Big Ten history.

“He is a great back,” said Syracuse linebacker Marlowe Wax, who competed against Ibrahim in high school. “So I’m happy to see that he is still doing good things One of the best backs in the nation. I’m just ready to see what he is going to do at the next level.”

Trey Potts replaced Ibrahim in the backfield and had 27 yards on 10 carries. Daniel Jackson hauled in a pair of TD passes — a 20-yard reception in the second and a 25-yard grab in the final minute of the third.

Syracuse (7-6) ended what was a promising season on a down note, playing without star running back Sean Tucker, who declared for the NFL draft on Dec. 17. Syracuse’s offense totaled 477 yards but struggled at times as the Orange lost six of their final seven games after a 6-0 start elevated them to No. 14 in The Associated Press Top 25 Poll.

“The loss definitely does hurt, but we have to remember that we did some great things this year,” Wax said.

LeQuint Allen replaced Tucker and finished with 103 yards on 16 carries.

Garret Shrader faced constant pressure and completed 32 of 51 passes for 329 yards. He ran for both of Syracuse’s TDs, and also overthrew receivers at times.

Ibrahim opened the scoring and nearly took a tackler with him up the middle with 13:39 left in the second quarter for a 7-0 lead. After Kaliakmanis was injured, Jackson made a leaping catch in the right corner of the end zone seven minutes later.

Shrader’s run moved Syracuse within 14-7 by halftime, and a 40-yard field goal by Andre Szmyt made it 14-10 early in the third. The Golden Gophers took a 21-10 lead when Coleman Bryson stepped in front of a pass intended for Oronde Gadsden II and returned the interception 70 yards.

Jackson’s second TD put Minnesota up 28-13 with 38 seconds left in the third. Syracuse caught a break when Allen lost a fumble, but it was negated due to Minnesota having 12 men on the field. Shrader scrambled from eight yards out with 2 1/2 minutes remaining.

Bryson appeared in his fourth career game due to injuries in the secondary and besides getting his first career interception, the freshman defensive back totaled seven tackles.

“I looked up at the screen actually and I couldn’t believe it,” Bryson said. “What’s crazy though I got beat on that route like three or four times in the season.”

It also was Minnesota’s first interception return for a TD in a bowl game and Bryson became the first defensive player to win MVP honors since the game debuted in 2010.

Syracuse: The replacement for Tucker will become a major storyline ahead of the season opener against Colgate on Sept. 2.

Minnesota: Whoever Ibrahim’s successor is in the backfield will open the season Aug. 31 against Nebraska. The Gophers also will face powerhouses Michigan and Ohio State in the same season for the first time since 2015.