Gophers can lock up bowl eligibility with win at Nebraska 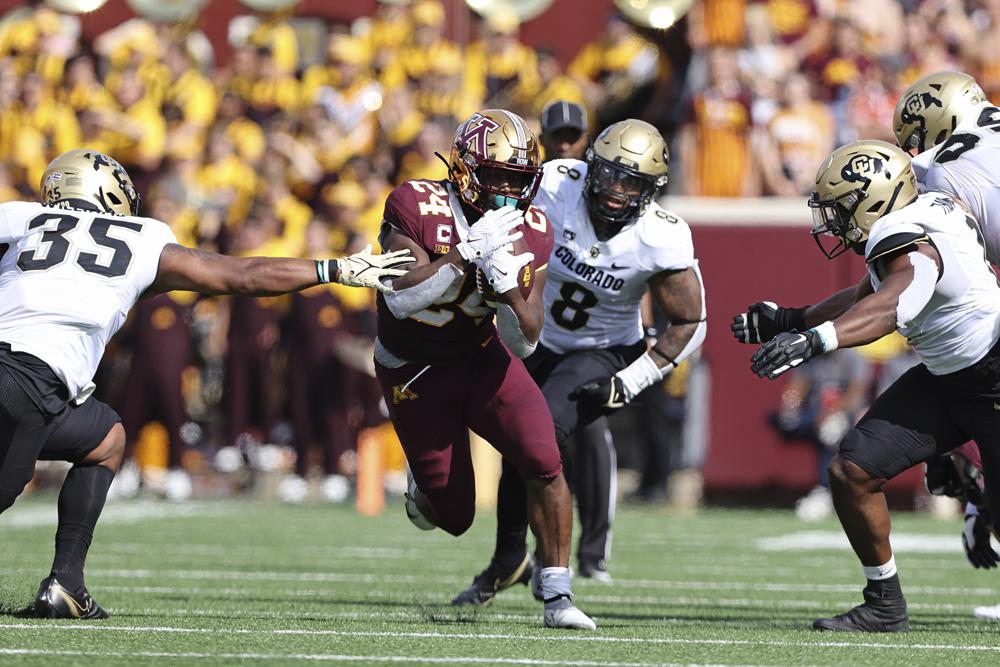 Minnesota running back Mohamed Ibrahim (24) carries the ball against Colorado during the first half of an NCAA college football game, Saturday, Sept. 17, 2022, in Minneapolis. (AP Photo/Stacy Bengs)

Minnesota is two games behind first-place Illinois in the Big Ten West and needs a win here to keep its slim division hopes alive. A win also makes the Gophers bowl-eligible for the fourth time in five years. Nebraska’s bid for a first bowl bid since 2016 would take a serious hit with a loss here and a trip to Michigan up next.

Minnesota RB Mohamed Ibrahim vs. Nebraska defense. Ibrahim has run for at least 100 yards in 16 straight games, the longest active streak in the Bowl Subdivision, and the Gophers average 4.9 yards per carry. The Cornhuskers’ defense is worst in the Big Ten against the run.

Minnesota: DE Jah Joyner. The third-year sophomore had a breakout game last week with a fumble recovery and a shared sack with Danny Striggow against Rutgers. Joyner also brought down Rutgers QB Gavin Wimsatt from behind on a second-quarter scramble for no gain on third down, a not-quite sack that forced a punt. The Gophers have the fewest sacks (10) in the Big Ten.

Nebraska: QBs Casey Thompson or Chubba Purdy. Interim coach Mickey Joseph said Thompson would be a game-time decision after missing the second half against Illinois last week with numbness in his right (throwing) hand. If Thompson can’t play, Chubba Purdy likely will make his first start.

Minnesota has won three straight and four of the last five against Nebraska. … Nebraska RB Anthony Grant’s 156 carries through eight games are most since Terrell Newby had 190 in 13 games in 2016. … Minnesota’s 31-0 win over Rutgers last week was the Gophers’ first Big Ten shutout since 2004. The Gophers beat New Mexico State 38-0 in their opener and now have two shutouts for the first time since 2006. … Nebraska’s 248 total yards against Illini are tied for its second fewest in a Big Ten home game behind the 231 the Huskers had against Ohio State in 2019. … Gophers S Tyler Nubin had two interceptions last week and is second on the team with 35 tackles.