The Chatfield Gophers (12-0) were looking to repeat as state champions as they took on a hungry Barnesville Trojans (12-0) team.

Barnesville took the early lead in the first quarter as running back Dawson Gregg scored on a 2-yard TD run. The Trojans rushed for 100 yards and took a 6-0 lead after the opening frame.

Chatfield fought back to take the lead with 7:02 before the half, as Sam Backer threw to Kailan Schott for a 36-yard touchdown pass. Luke Carrier then ran in a 2-point conversion to make it 8-7 Gophers.

The Trojans re-claimed the lead after a Chatfield turnover as QB/RB Zachary Bredman threw an 8-yard TD pass to Tate Inniger. Braeden Bredman ran in the 2-point conversion, giving the Trojans a 15-8 lead with 2:38 before the half. 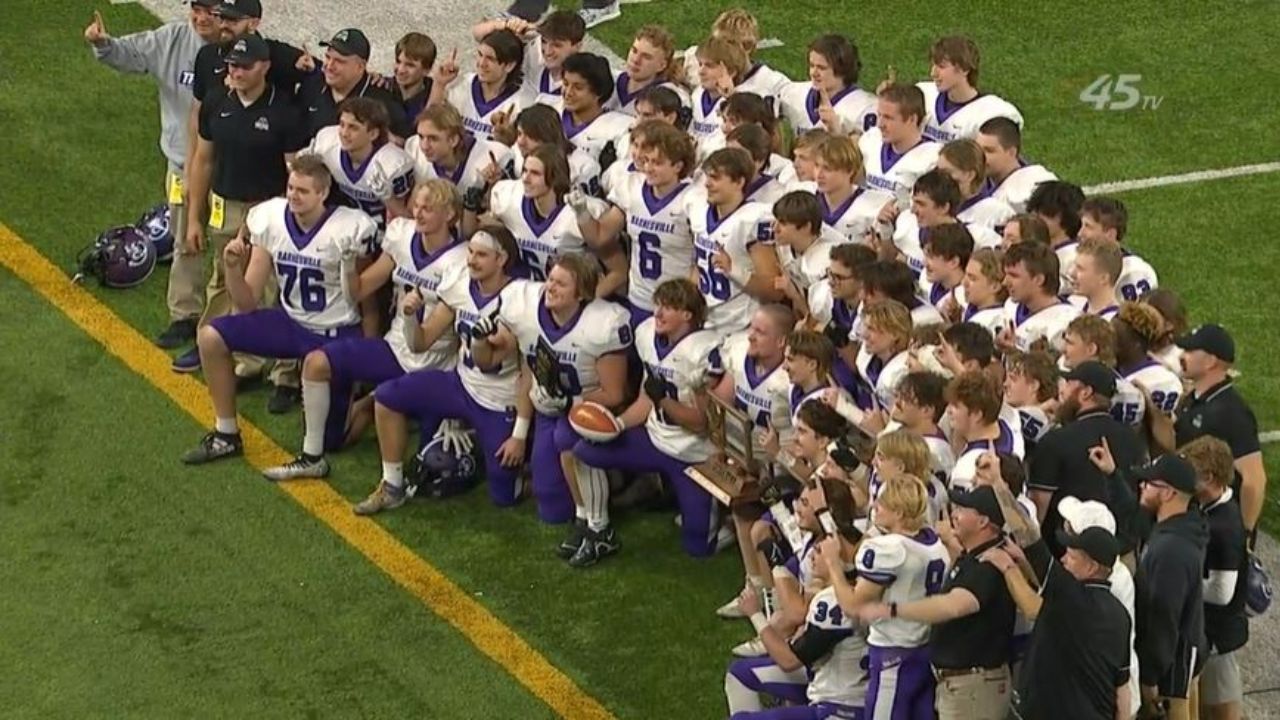 The next drive for Chatfield would result in another turnover, Backer’s third of the game when a pass was intercepted at the Barnesville 12-yard line. The ensuing Trojans possession would see Bredman hookup with Inniger again, this time with a 28-yard TD completion. Bredman would score the 2-point conversion to give the Trojans a 23-8 lead with 1:13 before the half.

Chatfield would get a score in right before the half with Backer running for a 17-yard TD to cap off a 7-play, 64-yard drive to make it 23-14 at the break.

Chatfield would start their first drive of the second half on their own 38-yard line. They would drive 26 yards on 6 plays before Backer would throw his 3rd interception of the game, his 4th overall turnover.

The Trojans would strike after the Gophers’ turnover and chew up some clock in the process. Bredman tossed a 9-yard pass to Inniger for another Trojan touchdown, their 3rd TD hookup of the game, ending an 11-play, 73-yard drive.

The final quarter would open with Backer running for 34 yards to the Trojans’ 15-yard line. Backer would then sneak across the goal line scoring on a 4-yard TD run, however, it would be called back as Backer’s elbow hit the turf just shy of the goal line. The Gophers would ultimately cash in on the very next play as Backer would rush up the middle for the score capping a 9-yard, 55-yard drive. The extra point kick failed, and the Gophers trailed 29-20 with 9:52 left in regulation.

Barnesville would take the ensuing kickoff all the way down to the Gophers’ 30-yard line. However, the Gophers’ defense would look to take a stand. A Trojan false start penalty would back up the offense and make it 4th-and-11, however, Gannon Bolgrean would run for a 15-yard gain and a Trojans first down. Three plays later, Inniger would take the handoff and throw to TE/DL Wyatt Suter for a 12-yard completion to the Gophers’ 1-yard line. Inniger would then punch the ball in giving the Trojans a 35-20 lead. The 2-point conversion would fail.

The next Gophers drive would start at their own 30-yard line with 4:14 to play. The Gophers would then drive to the Trojans’ 35-yard line before Backer would throw his 4th interception of the game as Gannon Bolgrean would pick the ball off at the Trojans’ 2-yard line.

Barnesville would then run out the clock and claim the Class AA Championship with a 35-20 win over the Gophers ending their bid for a repeat.