(ABC 6 News) — Around 9:00 p.m. on Wednesday, July 20, the Rochester Fire Department and Mayo Clinic Ambulance were called to the Edgewood Apartments in SE Rochester for a 17-year-old who had a broken leg. However, when they got there, there was a large group of people outside and first responders had to call police.

When police got there, they went to the door of an apartment where they heard a woman screaming “stop choking me”, and said 24-year-old Deshon Wade was at the door, but wouldn’t let them in. Rochester Police Lieutenant Thomas Faudksar said Wade threatened to “knock out” an officer. Inside the apartment, police could see the man and woman fighting. Eventually the woman broke free from the man and Lt. Faudskar said she attacked the officers and punched one in the face. Police said Wade and another man also assaulted officers. One officer got a cut on his hand and another was head-butted.

The officer who had gotten punched had bruising on her cheeks, a cut inside her lip, a bloody nose and a headache.

As they were trying to make arrests, police said another large crowd gathered and officers described it as a “chaotic scene” and said there were numerous people who were very uncooperative.

In the end, police arrested three people. Tarica Nichol-Jones, a 27-year-old from Rochester, is facing charges of 4th-degree assault, obstructing the legal process, and disorderly conduct. As of Thursday morning, there was no booking photo of Nickel-Jones from the Olmsted County Adult Detention Center because jail officials said she was being uncooperative and refusing to book. 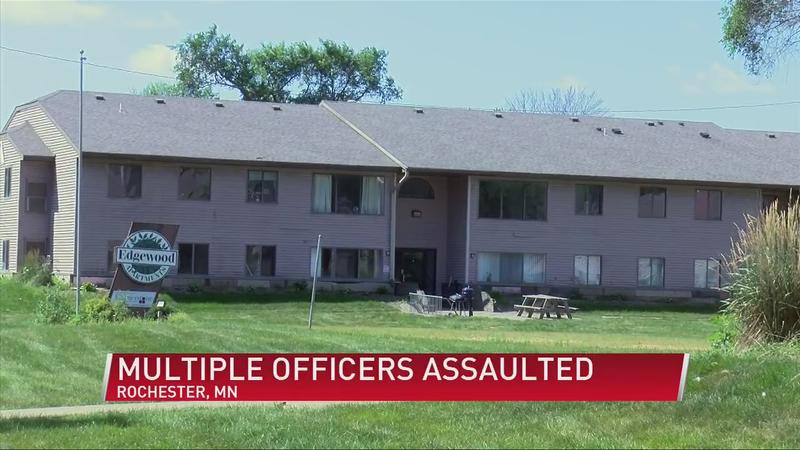 Earthman was also recently arrested in connection to a shooting in early May.

Officers went to Olmsted Medical Center to talk with the 17-year-old who had the broken leg to figure out what happened, but have not been able to connect with the teen yet because they were receiving medical care.

For more information on crime happening in your neighborhood, click on Spot Crime.