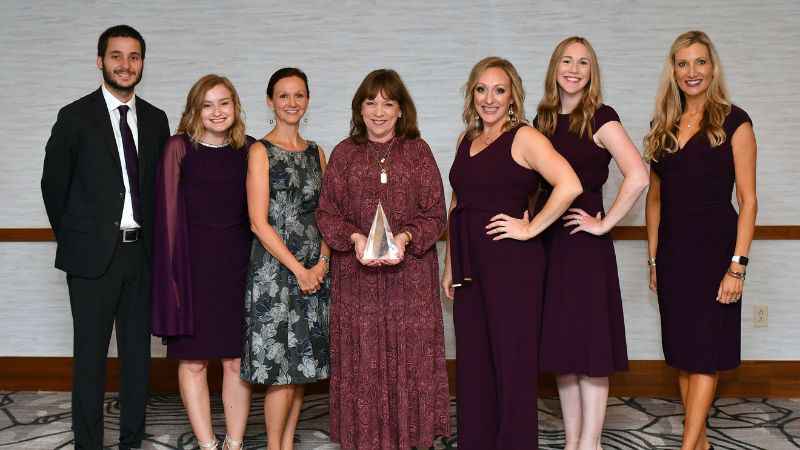 ACCE is based in Alexandria, VA and represents over 9,000 professionals who work for more than 1,600 chambers of commerce around the world.

Chamber of the Year, sponsored by Personify, is the most prestigious and competitive award presented annually by ACCE. It recognizes the leadership role chambers have in their communities.

Those honored with the Chamber of the Year designation have demonstrated organizational strength and made an impact on key community priorities, such as workforce attraction, infrastructure, economic prosperity, and quality of life.

“Chambers of commerce have never been more essential to regional prosperity,” said ACCE President & CEO Sheree Anne Kelly. “This achievement reflects how hard chambers work to ensure the vibrancy of their communities and organizational success. Congratulations on the Mason City Chamber’s outstanding leadership, commitment to its community, and service as a role model for the chamber profession.”

Staff from the Mason City Chamber accepted the award during the Awards Show at ACCE’s Annual Convention in Indianapolis.

Earlier in the week, Chamber President & CEO Robin Anderson and Cargill Plant Manager and Chamber Board Member Jessica Reith interviewed before a panel of experienced chamber professionals. This interview accounted for two-thirds of the final score.

Reith appreciated the opportunity to participate in the process and tout the local chamber’s accomplishments. “Our company understands the impact a strong chamber has on the economic prosperity of a region. As someone who has worked in other communities, I can attest to the value the Mason City Chamber provides to its members,” she said.

Qualifying chambers are invited to enter the competition and submit an extensive written application addressing all aspects of organizational operation and programmatic work. Applications are scored by peer chamber executives to determine finalists.

To ensure the fairest competition, applicants are grouped into four categories based on: annual revenue, membership, area population, and other factors. In the final round, the Mason City Chamber competed against leadership from the North Tampa, FL and Zionsville, IN chambers.

According to Anderson, this award represents the pinnacle of achievement. “We’re humbled and honored by this recognition. It’s been a big year for us. First, we were awarded Five-Star Accreditation by the US Chamber of Commerce, and now we’ve been recognized by ACCE as the Chamber of the Year,” she said. “We’re certainly well-positioned to continue our work for the businesses of North Iowa. I’m so proud of our volunteers and our staff,” she continued.