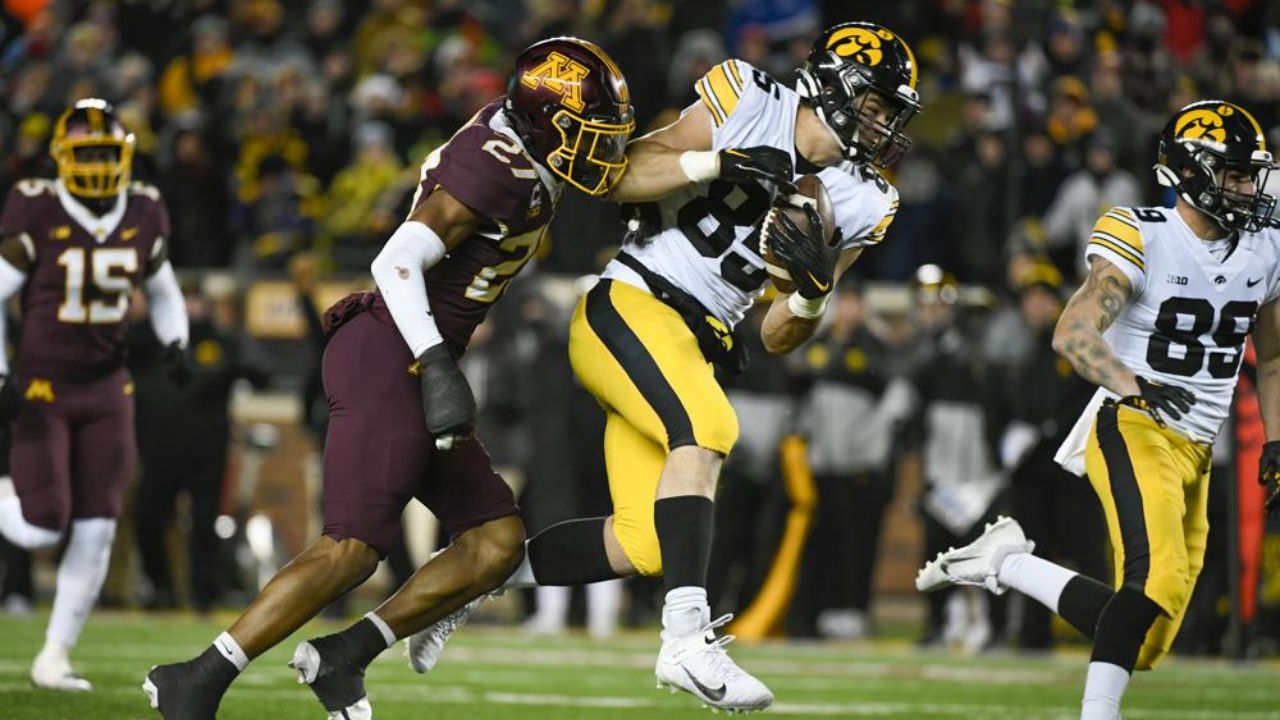 Iowa tight end Luke Lachey (85) catches a pass as he is tackled by Minnesota defensive back Tyler Nubin (27) during the second half an NCAA college football game on Saturday, Nov. 19, 2022, in Minneapolis. (AP Photo/Craig Lassig)

Iowa returns to the Big Ten championship game as West champion if it knocks off the Cornhuskers an eighth straight time. The Hawkeyes were 1-3 in conference play a month ago and a December trip to Indianapolis looked like an impossibility with upstart Illinois reeling off wins. But the Illini have lost three straight, and the Hawkeyes are on the doorstep after four straight wins.

Iowa defensive line vs. Nebraska offensive line. Deontae Craig, Lukas Van Ness and Joe Evans have combined for 9 1/2 of the Hawkeyes’ 14 sacks over the last four games and are part of a front that was giving up just 89 yards rushing per game before it encountered Minnesota’s Mohamed Ibrahim last week. Ibrahim had a career-high 263 of the Gophers’ 312 yards on the ground. But Nebraska doesn’t have a running back like Ibrahim, and its offensive line is one of the lowest-ranked in the nation.

Nebraska: QB Casey Thompson has been beaten up all season and missed two games because of an elbow nerve injury. Even though he still has numbness in his right pinkie, he’s easily the Huskers’ best quarterback and gives them their best chance to beat Iowa for the first time since 2014.

Iowa: LB Jack Campbell, if he hadn’t already, secured his place in Hawkeyes lore with his 10 tackles and fourth-quarter forced fumble and interception against Minnesota. He’s on track to lead the Big Ten in tackles for a second straight year and will be looking to go out in a big way in what probably is his Kinnick Stadium finale.

Iowa has won 14 straight November games and is 18-5 in November games since 2017, including 9-2 at home. … Iowa has held nine of 11 opponents to 13 or fewer points and has scored four defensive touchdowns. … The teams play for the Heroes Trophy. Iowa has won by a touchdown or less each of the past four years. … Edge rusher Caleb Tannor will play in his 56th game at Nebraska, which would tie Cameron Meredith’s school record for games played (2008-12). … Nebraska is playing on Black Friday for the 33rd consecutive season. The Huskers have played Iowa on the day after Thanksgiving the past 12 seasons. Before that they played Colorado (1996-2010) and Oklahoma (1990-95).