Veterans take to the lake to be thanked for their service

(ABC 6 News) – Some local veterans had the chance to hit the water Wednesday for the annual "Veterans Cruise" on Clear Lake. For many, this cruise is much more than enjoying the view.

Roger Howland served in the U.S. Army back in the 60s and called Clear Lake home for 30 years. Now living in Minnesota, he’s made his way back to the hawkeye state.

"Just to look at the lake," said Howland. "Because I used to have a pontoon on this lake. [We] went pontooning an awful lot on this lake. The best memories I’ve had are just being on this lake."

He’s grateful veterans are being thanked for their service.

"The way things are going today with our nation, it just makes me sick. They’re treating us veterans like dirt and not treating us like they should. 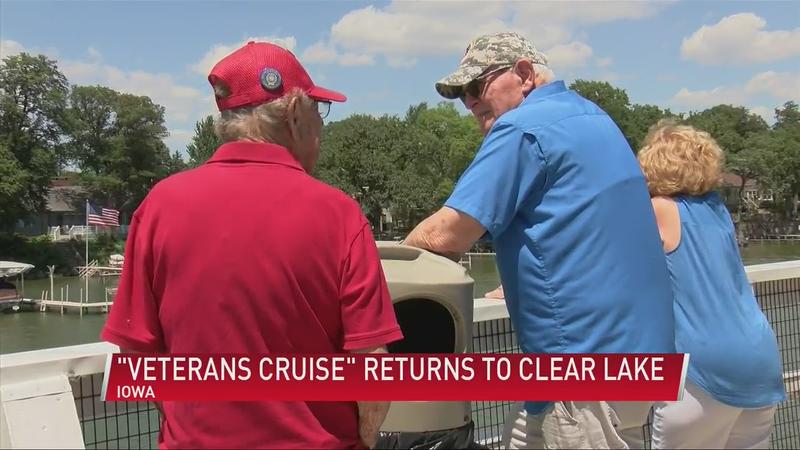 Scott Monson owns the boat, ‘Lady of the Lake,’ and has been doing this for veterans for more than 10 years.

"Seeing the smiles on everybody’s faces . To get them out here on the lake and to do something that they wouldn’t normally do. Just a way, like I said, to give back and say ‘thank you.’"

Monson has also made some memories on this lake.

"I lost my grandfather a few years ago and he was a World War II vet. And it was just a way to spend time with him."

And for U.S. Navy veteran Jay Lee, this isn’t his first veterans cruise. He keeps coming back.

"It’s just enjoyable to be around people that have been in service, same branch you have been, the same conflicts you’ve been in," said Lee.

Lee also shared a special message for those who are serving: "[I] wish them all the blessings in the world that God has given us and they’re one of them."

If you missed this year’s cruise, Monson said you can plan for a Wednesday next summer, sometime around Flag Day.