UPDATE: One in custody following domestic situation in Dodge Center

(ABC 6 News) UPDATE 5:10 p.m. – A 65-year-old man has been taken into custody with no injuries following a domestic incident in Dodge Center.

According to the Dodge County Sheriff’s Office, a call came in just before 11:30 Monday morning for a domestic situation in the 500 block of 3rd Ave NW.

A woman told a deputy that she and two other family members were trying to get 65-year-old John Lentz to go to St Marys Hospital to be evaluated as he seemed off and has a history of mental illness.

A roommate told a deputy that he observed Lentz holding his dog down on the floor, so he pushed Lentz’s hands up to release him from the dog. Lentz then released the dog and then went after him and placed a chokehold on him.

The roommate was able to push Lentz off of him, but Lentz retaliated by striking him repeatedly on the left side of the face. 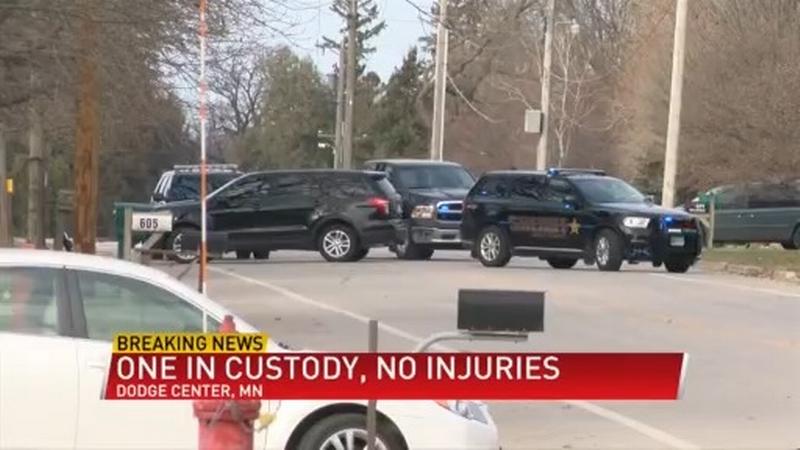 The man reportedly said he would use the rifle if any law enforcement tried to interfere.

Triton School District was placed on a soft lockdown as well as surrounding homes were also evacuated.

At approximately 1240 p.m., Lentz walked out his door, threatened officers again, and then walked back inside. Olmsted/Rochester ERU arrived to assist shortly after 2 p.m. and coordinated with Dodge County Deputies inside the secured area.

After unsuccessfully trying to get Lentz to communicate by cell phone, the Emergency Response Unit deployed a distraction device into the home in an attempt to encourage Lentz to cooperate.

A search warrant was signed for Lentz’s residence. A complaint warrant for Lentz’s arrest had already been issued earlier by Judge Williamson for the felony domestic assault by strangulation, terroristic threats, and 5th-degree MSD assault.

Shortly before, 5 p.m. Lentz came out and turned himself in. He was taken into custody and transported to St Marys Hospital for evaluation.

Lentz will be held for court on his charges.

(ABC 6 News) UPDATE 5:10 p.m. – According to Dodge County Sheriff Scott Rose, one person has been taken into custody with no injuries related to the incident.

We have one in custody with no injuries in Dodge Center. Media Release to follow.

According to the Dodge County Sheriff’s Office, a call came in just before 11:30 Monday morning for a domestic situation in the 500 block of 3rd Ave NW.

Authorities said they believe there is a rife in the home. The man reportedly said he would use the rifle if any law enforcement tried to interfere.

Everyone inside the home was able to get out leaving just the man inside. The surrounding homes and area were also evacuated.

As of 2:30 p.m. there had been no further communication with the man.

The public is urged to avoid the area.

ABC 6 News has a reporter at the scene and will provide updates as they become available.

This is a breaking news story. Stay with ABC 6 News for the latest both on-air and online.