"Shocked. Dumbfounded is probably going to sum it up," said Ted Kiefer, who lives in Taopi and lost part of his farm.

Many homes on the west side of the city are decimated — with roofs and entire rooms gone. There are also fallen trees and downed power lines.

Resident Sean Humphrey said he saw the tornado moments before it hit his house.

"My ears — they popped and I could hear it. It sounded like a freight train. I don’t say that too lightly — it was frightening," Humphrey said. 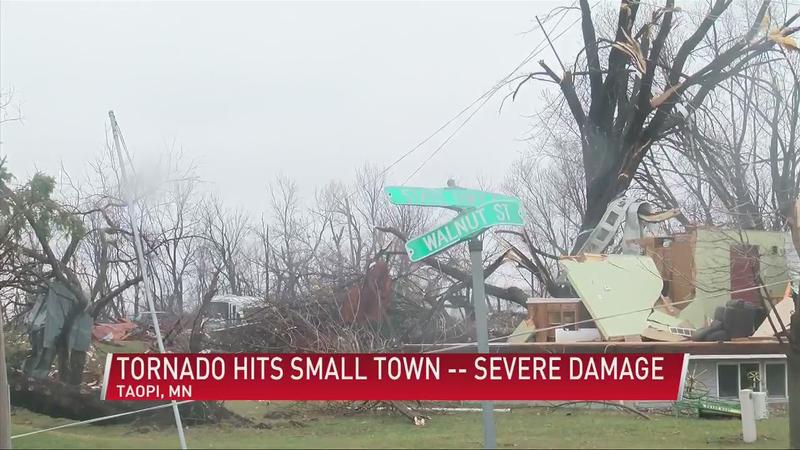 Taopi is a town of about 60 people, and according to the community, they’re relying on their neighbors to help recover.

"That’s the kind of community we are. They just help out no matter what," Humphrey added.

"Even if they don’t know you they’re calling and offering to help. We’re fortunate to live in a small area I guess," said Kiefer.

Most people were safe in their basements during the storm, as high winds tore through their homes. However two others are injured, Tom Kasel and his girlfriend Jewel, from their home’s foundation falling on them while they were in the basement, according to Kasel’s mother.

"When we got our call last night we didn’t know what to expect. We just knew they were trapped. They called for help," Barb Kasel, Tom’s mother, said.

"I’m very thankful. We’re all in this together," she said.

The National Weather Service is on the ground in Southeast Minnesota Wednesday and the following days assessing the damage.

Surrounding communities are coming together to help with recovery efforts in Taopi.

According to the Adams American Legion Post 146 Facebook page, the legion is collecting gift cards, cleaning supplies, and storage units for families. You can drop off donations at the Legion on Saturday starting at 4 p.m.

Donations are also being collected at the Little Cedar Church in Adams from 9 a.m. to 4 p.m. Monday through Friday.