(ABC 6 News) – Three months ago, a tornado ripped apart the small town of Taopi, back in April. Mower County says they have learned a lot from the disaster and purchased the county’s first mobile command center, to provide immediate disaster relief.

Tom Kasel lives in Taopi and was a victim to the EF2 tornado, which sent him and his girlfriend, Jewel, to the hospital. It also destroyed his home and entire farm.

"The basement wall collapsed and fell on us. Pinned us up against the stairwell, stud wall framing," Kasel explained.

Now, the couple is doing much better after spending a few weeks in the hospital. The rebuilding of the farm, is in full swing.

"We have two buildings yet to tear down and the shop repairs are coming well. We should be completed within a week or two on the shop," Kasel said. 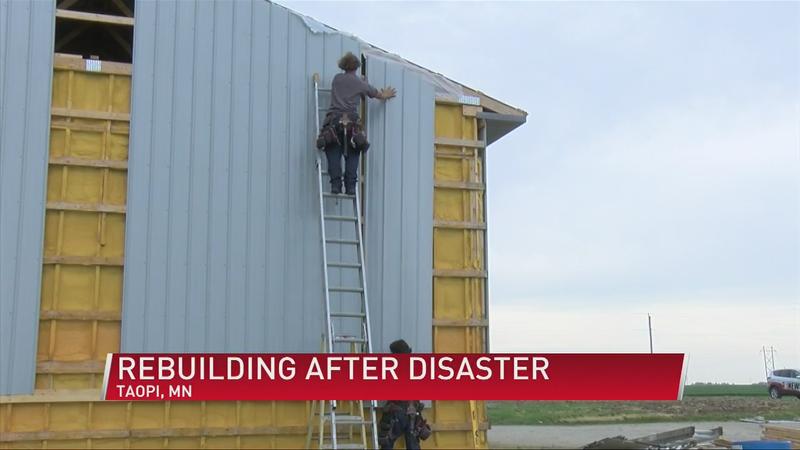 However, the spot that once held his home is now just a plot of dirt. It will be another year before Kasel builds a new home. Now, the two live in an apartment in Austin, Minn. while the farm is being rebuilt.

After the tornado destroyed the small town of about 60 people, one of the most useful tools during disaster relief was a "mobile command center". It is an ‘office on wheels’ that allows for immediate deployment to disaster locations, providing better assistance and clean up in the area.

"It will eliminate having to utilize other resources and we will have our own and be able to respond quicker when deployment is needed," Emergency Manager for Mower County, Amy Lammey, said. "It is nice to have another tool in our toolbox."

Now, if disaster strikes again, the county will be ready.

For the little town of Taopi, they are focused on moving forward. While the community is doing much better according to Kasel, the rebuild still has a ways to go.