(ABC 6 NEWS) – Sunflowers have bloomed again in Albert Lea, and the field is even bigger than last year.

Over 14 days last year, around 15,000 people went to see the field of sunflowers.

Fish Sunflowers by Johnny Fish are all around Minnesota, and this year there are three fields instead of one in Albert Lea.

The fields were planted in July with around 50,000 seeds and officially opened for people to visit on Friday, all for free.

For some, it was their first time visiting. 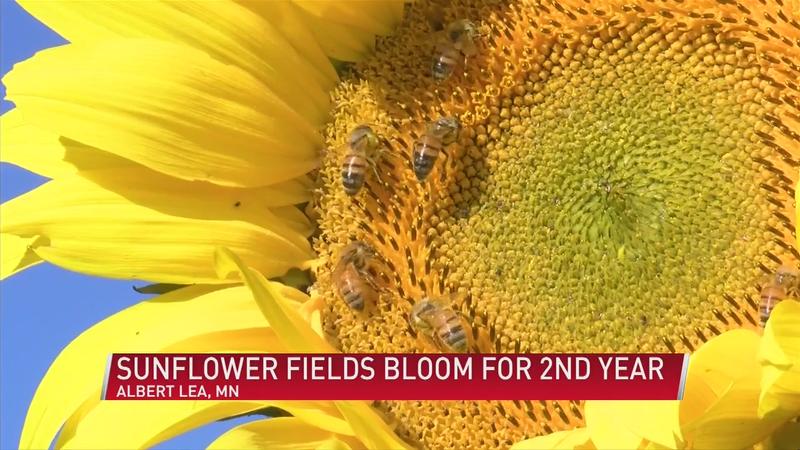 For others, it was their second time.

"It’s something nice to do to get outside, especially during the pandemic," Austin resident Kayla Knutson said.

Whether you visit the fields for a stroll, to take pictures, or find what’s hidden behind all the yellow and green.

It is much more than just a field of sunflowers.

The three fields are honoring hometown heroes, military heroes past and present, and those impacted by mental, as well as those lost by suicide.

"It’s a combination of watching what is going on around us as well as just listening to feedback from people who have ideas too," Property owner of the Albert Lea fields, Jared Dawson, said.

Dawson hopes to see this year’s fields pay off just like last year.

"We did it once, we are gonna do it twice, and if things go well we will do it three times," Dawson said.

It’s a chance to spread some sunshine and let anyone honor someone they know.

"For people to take the time to do this to share it with the rest of us how generous what awesome people they have to be," Roisen said.

The fields will be open through Sept. 27 as long as the flowers stay in bloom.

Due to the drought, Fish Sunflowers lost around six fields this year in other parts of the state, but they said the Albert Lea one grew well and is a healthy crop this year.

To follow along for updates on the fields you can check out the Fish Sunflowers Facebook page.