Jacob, who was detained by Russian forces for 10 days, was safely reunited with his wife and daughter and has now returned to Minnesota. Klobuchar was also joined by Jacob’s mother, Tina Hauser, and Clara Haycraft, Senator Klobuchar’s Deputy State Director who oversees constituent services.

“I got involved in this, of course, when Tina called our office and said that her son, she hadn’t heard from him, from Tyler for several days and that she knew something was wrong,” said Klobuchar. “And at first we didn’t know what was going on and so we started making calls and I had just been in Poland at the border and so I knew a lot of the people…and was able to immediately call them.”

Klobuchar highlighted her efforts working with the U.S. Embassy in Moscow to ensure Tyler’s safety: “We got on the phone with Ambassador Sullivan…and I told him about Tyler’s case, and he knew about it, because we’ve been making all these contacts…And he said he was going to go to meet with the Russians…to plead Tyler’s case.”

Jacob thanked Klobuchar and her Deputy State Director, Clara Haycraft for their efforts to bring him to safety: “Thank you very much for all of the hard work you’ve both put in. You were responding to text messages and emails at 11, 12 o’clock at night,” Jacob said. “I definitely don’t believe I would be here if it wasn’t for you guys vouching for me.” 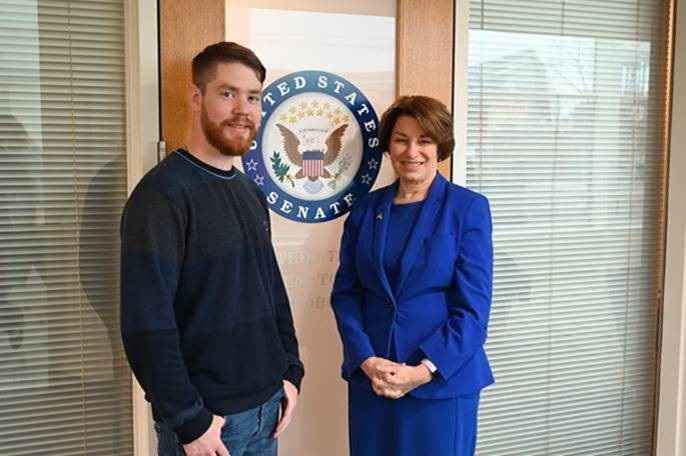 “It’s just a great joy when he walked in the house and knocked on the door and have him come home after all the communication that I’ve had…with the senator’s office, and I am so indebted to these two women to stand behind us like they did and supported us, to have him home,” said Jacob’s mother Tina Hauser.

Approximately a month ago, Tyler Jacob, originally from Winona, Minnesota, was taken by Russian forces while leaving Ukraine, where he lived with his wife and daughter. He was then detained in Russia and held for 10 days. Klobuchar worked closely with Tyler’s family, the U.S. State Department, and the U.S. Embassy in Moscow to locate Tyler and help bring him to safety.