(ABC 6 News) – March for Our Lives protests were held across the country on Saturday.

About 100 people met in Peace Plaza and marched to the Olmsted County Government Center to hear from lawmakers and school board members and to hold a moment of silence for the Uvalde victims.

"The reason I’m here is because four years ago I walked out of my high school to March for Our Lives and we walked out with our signs and I carried this very sign with me and here I am four years later as the adult and we’re still fighting for the exact same thing because it feels like so little has been done in that time," Beni Benyei, co-organizer of March for Our Lives Rochester, said. "I think it’s a little heartbreaking and makes me angry as well because I just want to see action and I want the kids to not feel what I felt in school."

People of all ages spoke out to end gun violence from happening across our country daily.

"I’m scared at school because guns are the worst thing in the world. I want people to fight and protect themselves and vote," seven-year-old Elle Hicks said. 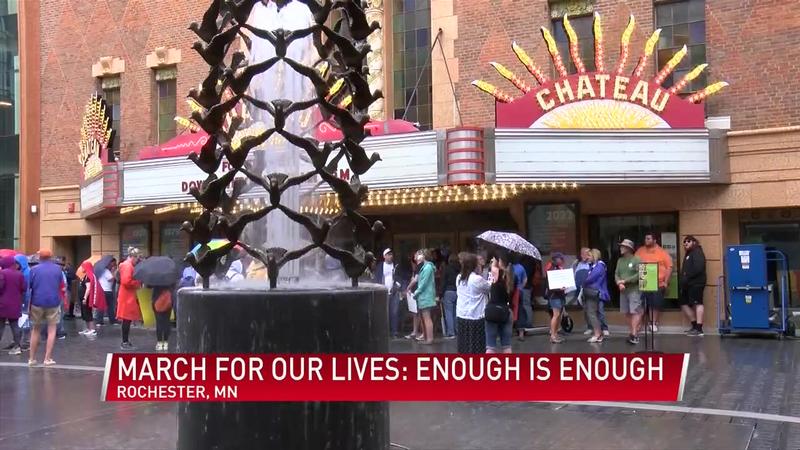 Local lawmakers and those running for elected positions came to hear from others and to show how they would end gun violence if elected.

"They are not listening to us. They are not representing the voices of the people. So we’re here to raise up that voice and demand that all of the people who are elected to represent us actually take action for once," Aneta Borrud, DFL Senate District 24 candidate, said.

"And now we practice putting children under desks so they can defend themselves against automated weapons. Enough," Kim Hicks, DFL House District 25A candidate, said.

The microphone was open to anyone who wanted to have their voice heard.

"If they’re not going to have universal background checks, if they can’t red flag, we need to vote them out of office. There appears to be no other answer," one man said.

Benyei and others hope this march in Rochester brings us one step closer to ending gun violence across our country.

"I think it will bring us together to end gun violence and hopefully our people in power see us or hear us. And I hope people realize that we can change this and gun violence is preventable," he said.