(ABC 6 News) – City leaders and members gathered for a meeting Wednesday night on the Silver Lake Sediment Removal and Revitalization project. One of the biggest changes to Silver Lake is the removal of the dam.

The group ‘Friends of Silver Lake’ organized the meeting with Rochester Mayor Kim Norton to get information out to the community on the big proposed changes to the park.

More than 100 people showed up wanting to get their questions answered.

"There was again some confusion about whether the decision has been already been made. Yes, it has. But what it is is what we want you to know," Mayor Norton said.

She wanted to make it clear Wednesday that this has been voted on and approved by the Rochester City Council and is a bonding project this year for the city. 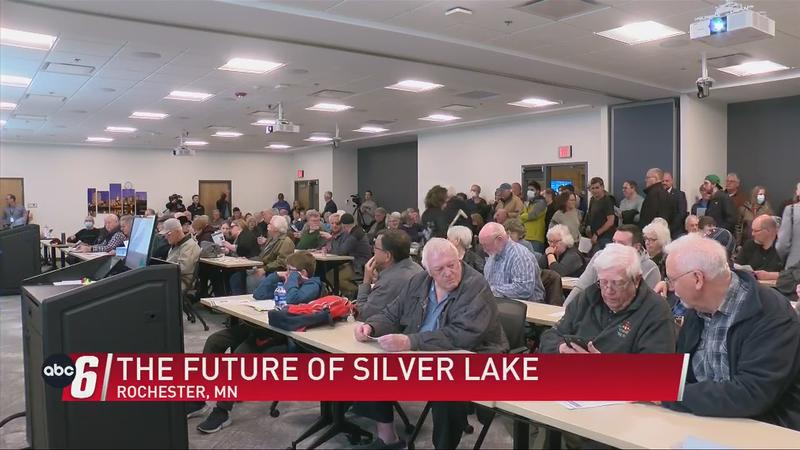 The biggest change would be the removal of the 1937 Silver Lake dam which would be replaced with a 400-foot channel of cascading pools.

Friends of Silver Lake is trying to save the dam but they believe the rest of the project like the sidewalks and pedestrian bridges should be redone.

"We’re not sure that the proposed replacement for it will provide all of the things that the city is hoping that it might provide," Gregory Munson, co-founder of Friends of Silver Lake, said.

One of the concerns Friends of Silver Lake has is that the community doesn’t know about this project and the changes it could bring to Rochester.

"Which we feel the lake is extremely important to the citizens of Rochester and historically it’s important and we don’t want to lose the lake," Munson said.

Other members of the community think the opposite.

"I’d love to see that dam taken out and there be a continuity of habitat all the way up," Rochester resident Brett Ostby said.

Ostby said he studied fishery sciences in college and has now started his own business in Rochester that provides scientific expertise on the conservation of endangered species management.

"I think it has the potential to do a lot of ecological restoration. Right now the lake is really a poor natural resource, it’s filled with sediment," Ostby said. He said he’s dove to the bottom of the lake before.

The last time Silver Lake was dredged was 25 years ago. Sediment removal in Silver Lake is needed to comply with flood mitigation requirements.

Ostby thinks the lake would disappear if the dam was not taken out.

"I think that’s a hard change for Rochester but I think it’s the right thing to take care of the river and provide people more access to the water," he said.

The removal of the dam would also expand various recreational activities like canoeing and kayaking.

Specific park improvement features are being informed by a community-driven master planning process which will begin in the coming weeks. Dredging would begin in 2023 and continue in 2024. Additional improvement projects would be completed in 2023-2025.