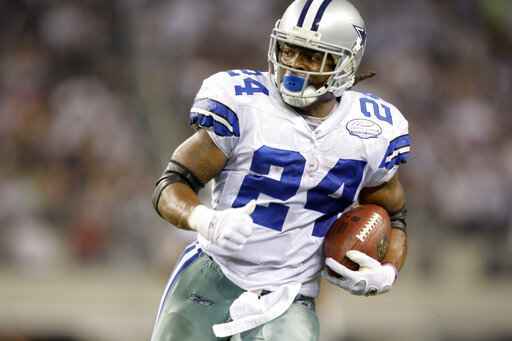 FILE - Dallas Cowboys running back Marion Barber III carries during the team's NFL football game against the New York Giants on Sept. 20, 2009, in Arlington, Texas. Barber, who scored plenty of touchdowns without recording a 1,000-yard season, has died, the team said Wednesday, June 1, 2022. He was 38. Barber played a final season with Chicago in 2011 after spending his first six years with the Cowboys. (AP Photo/Donna McWilliam, File)

The family of Marion Barber III does not yet know his official cause of death, according to a new report.

Barber, a former running back for the Dallas Cowboys and Minnesota Golden Gophers, was found dead Wednesday in his apartment in Texas.

The Fort Worth Star-Telegram was the first to report on Barber’s death, which was later confirmed by the Dallas Cowboys.

According to the Fort Worth Star-Telegram’s report on Thursday, the coroner in Frisco, Texas, expects to know more on Sunday as the cause of death investigation continues.

The family is proceeding with funeral arrangements, which are set to take place in Minneapolis later this month, the Fort Worth Star-Telegram reports.

Barber, 38, was an all-time Gopher football great from 2001-04. He graduated from Wayzata High School in 2001. Barber and former Gopher teammate Laurence Maroney were the first Division 1 teammates to each rush for 1,000 yards in consecutive seasons.

Barber had a career-high 975 yards rushing and 10 TDs in 2007, when he made his only Pro Bowl. In the years after his football career ended, he faced mental health issues and was taken to a hospital at one point for evaluation.

Frisco police confirmed with 5 EYEWITNESS NEWS they responded to a welfare concern at an apartment believed to be leased by Barber on Wednesday, during which his body was found.

The Associated Press contributed to this report.