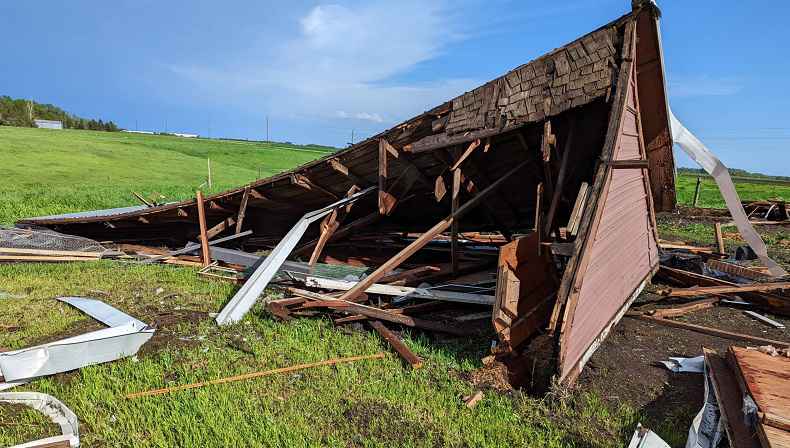 Two horses stand out of frame after an airborne shed (remains pictured above) nearly crushed them in Morris, Minnesota, according to the owner. Credit: Jacqueline Vargas

The small western Minnesota town of Forada will be starting the cleanup process after being hit by a tornado Monday.

Forada was one of the worst-hit communities during Monday’s severe weather outbreak.

The National Weather Service (NWS) says law enforcement confirmed a tornado touched down in the city, and Forada Fire Chief Stephen Van Luick there says he isn’t surprised based on what the town looks like.

Video shows a path more than a mile and a half, possibly up to two miles, of damaged buildings, including homes and cabins.

The storm brought high winds and heavy rain, ripped roofs and walls off of buildings, tossed boats and small buildings around and knocked trees down across the area.

NWS teams will be helping to assess the damage in Forada on Tuesday to determine just how strong the tornado was. Their teams will also be assessing damage across the state caused by Monday’s storms.

Van Luick says his team has searched homes, and says no major injuries were reported.

“I’ve been on the fire department for 33 years and … first time I’ve ever seen anything like this,” said Van Luick.

As of this time, 5 EYEWITNESS NEWS hasn’t heard of any organized cleanup efforts.

In addition to Forada, viewers have submitted photos and videos of storm damage from across the state. A gallery of photos can be found at the end of this report.

Among the items submitted to 5 EYEWITNESS NEWS include a video showing what appears to be a flattened barn in Plato, just southeast of Hutchinson.

The Todd County Sheriff’s Office also shared photos of destroyed buildings, roofs torn off others and debris scattered across lawns and roads.

Photos from Starbuck and Appleton show funnel clouds in the area.

As of Tuesday morning, there were roughly 38,000 customers without power, according to PowerOutage.us. You can find information regarding restoration times with your power company by CLICKING HERE.

The outage number is down from roughly 51,000 customers experiencing outages during the overnight hours.

Although power crews will have to deal with gusty winds Tuesday, temperatures will be lower than the past few days. 5 EYEWITNESS NEWS Chief Meteorologist Ken Barlow adds there will be a few showers throughout the day. You can find the current forecast by CLICKING HERE.