(ABC 6 NEWS) One North Rochester home is welcoming the neighborhood into their front yard with an inflatable Halloween maze, and it’s all for a good cause.

Welcome to the Boyer house. They take Halloween to new heights with 120 inflatables. Some of which are more than 20 feet tall. There’s something for every visitor and trick or treater. The Boyer’s are a family of seven. They work together to create this light-up maze.

"Come Halloween night they all help. And usually, they all help to take it all down," homeowner Mike Boyer said.

Mike Boyer started his spooky endeavor on October 3. It’s not an easy job, but it’ one he does for good reason.

"To make memories. It’s for the kids of the neighborhood," Boyer said. 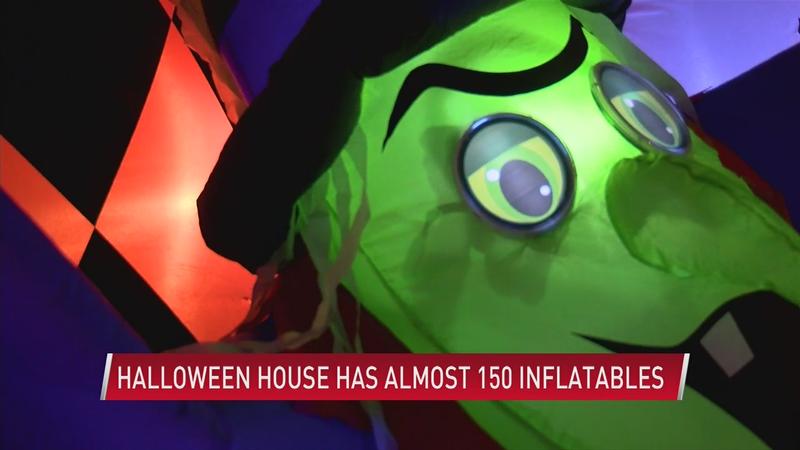 He’s had around ten years of practice. Lately, however, he’s added charity to his list of Halloween traditions.

"A few years ago we decided if we had this many people coming for Halloween, let’s involve community response," he said.

Last year the Boyer family raised over $1,500 for Channel One Food Bank. This year so far they’ve raised over $2,000. They have dozens of kids, couples, and families stop by each night. Lauren Price and her daughter, Michelle are visiting the area and heard about the house from neighbors. The pair made their way through the inflatable pumpkins, flashing lights, and smoke. They love the Halloween spirit. Kids like Michelle inspire the Boyer’s to keep adding to the maze.

"Just that they had fun and make that memory and the parents will say yeah we look forward to it every year. It makes me feel good," Boyer said.