(ABC 6 News) – A federal judge is immediately stopping the enforcement of a law passed earlier this year banning school districts from creating their own mask mandates.

Schools in Iowa now have the option to mandate masks in their districts, knocking down what Iowa Gov. Kim Reynolds’ law passed in May.

"We led in honoring parents’ freedom in deciding what’s in the best interest of their children," Gov. Reynolds said.

Now it’s up to schools across Iowa whether or not they will mandate masks.

"I think most school districts are probably going to go with what they’ve been doing," Doug Gee, Superintendent of Clear Lake Community Schools, said. 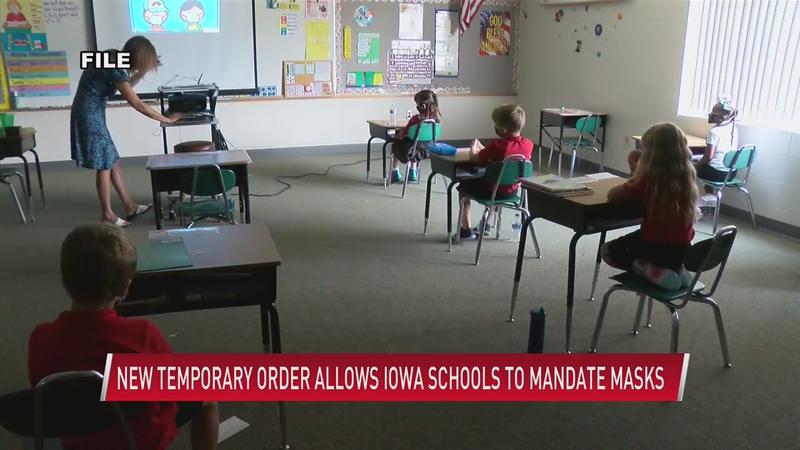 Clear Lake Community School District will not be putting a mask mandate in place as of now because they do not see a need to.

"We have not seen a big huge increase in COVID cases within our school. Probably not a lot different from what it was last year when we had masks required. And so I think at this time we’ll kind of stay the course," Gee said.

Clear Lake CSD still has all mitigation strategies in place from last school year including sanitation and recommending staying home if you’re sick. However, they are not doing contact tracing this year.

"You know, we’re really, right now as a district and as a community, I think we’re seeing more RSV and those types of things, strep than we are as far as COVID," Gee said.

Charles City Community Schools is awaiting more guidance from the state health department so no decision has been made yet as to whether or not a mask mandate will be put in place for the district.

But schools like Clear Lake are not leaving mask mandates completely off the table.

"If things change, which sometimes they do, and we feel the need to require them, we would move to that," Gee said.

Clear Lake Community Schools has a board meeting Tuesday night where they say they will be discussing masking in their schools further. Mason City Community School District has not said whether or not it will make a decision either way yet.