(ABC 6 News) – The Rochester City Council has taken the next step, toward bringing the Chateau Theatre back to life.

In a vote this week, the Rochester City Council has approved to move into negotiations with Threshold Arts.

Right now the building is vacant, but hopefully, once the weather warms up, the doors will be ready to open.

"It’s very exciting and it’s something that we’re honored to be able to do," Naura Anderson, founding director of Threshold Arts said.

As much as there’s excitement in the air about the possibilities of what Threshold Arts has in mind for the historic Chateau Threatre, some members of the Rochester City Council are hesitant. 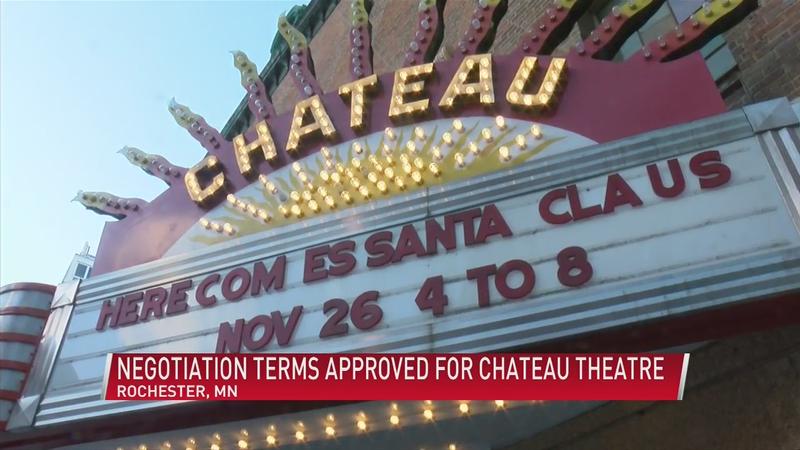 "A three-year deal to me at this time is not prudent for the city of Rochester. My preference would be the city team to be the ones we negotiate with," councilmember Shaun Palmer said.

"I disagree with Threshold going into the Chateau for interim activation," councilmember Kelly Rae Kirkpatrick said.

City Council Member Kelly Rae Kirkpatrick’s hesitations lie in a current civil lawsuit within the Castle Community LLC that includes Threshold Arts, one of the original tenants in the downtown Rochester building.

The complaint cites, in part, that the restaurant in the building, Cameo wasn’t able to operate as intended in the original lease agreement.

Cameo claims it’s due to Naura Anderson, the founder of Threshold Arts, and its business practices.

Council members did discuss the pending lawsuit, but several members also voiced that the lawsuit and the Castle Community needs to be viewed as a separate situation from Anderson’s proposal for the Chateau.

"It was so perfect the way it was, and had not the pandemic struck, everything would be fine in the Castle Community, so I don’t fault anything Threshold is doing. I think they’re phenomenal, so yes, I could see them as an interim activation at the Chateau," councilmember Kirkpatrick said.

The motion carried 5-2. Nick Campion with the city council says what was approved by council members is to direct staff to begin the actual negotiation process with Threshold Arts.

The negotiated agreement will then go back to the city council for consideration in the future.

"The space itself is an icon in this community. It is incredibly significant in the history of our downtown and we want to honor that history," Anderson said.

Anderson said she has big plans for the theatre.

"You’ll walk in the door and you’ll be greeted with a really comfortable space. The goal is to come into this community commons where they can play a game, they can hang out and have fun together," Anderson said.

And artists too are behind this vision.

"It’s not just about artists creating, it’s also about our citizens able to engage with these arts and see the vibrancy of the city," Tiffany Alexandria, founder of Choochoo-Ca-Chew said.

And this is what Anderson wants artists to know.

"For the artists, it’s been what we’ve been telling them since day one, we’re here to support you and we want you to bring your ideas to us, we want to advocate for you," Anderson said.

Part of the agreement by the city council last night includes the purchase of new furniture, equipment, and fixtures that Threshold Arts will need, but will stay with the Chateau.

As for the civil lawsuit, Anderson would not comment on it due to pending litigation.