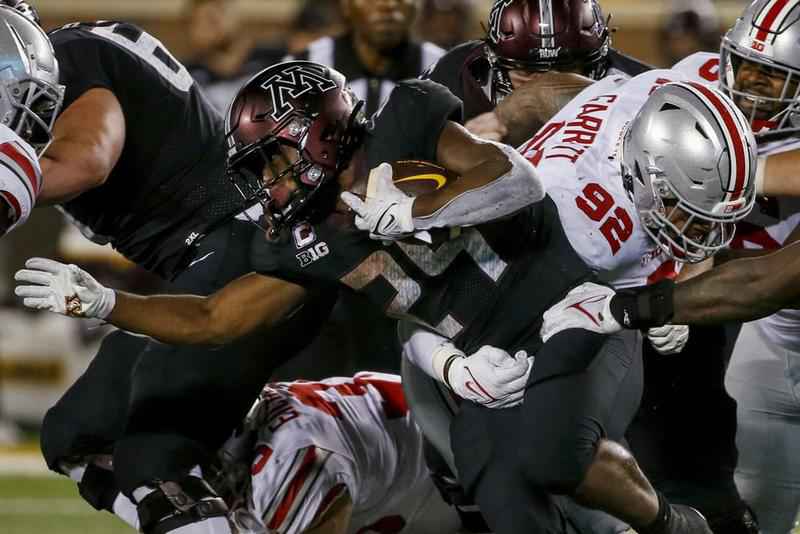 MINNEAPOLIS (AP) — Minnesota running back Mo Ibrahim will miss the rest of the season because of a lower left leg injury, coach P.J. Fleck announced Monday.

Ibrahim will have surgery Tuesday and need four to six months to recover, Fleck said. The fifth-year player was a second-team preseason Associated Press All-America selection.

Fleck declined to specify the injury, but he said Ibrahim sustained a tear. The severity suggested an Achilles tendon. Ibrahim was hurt on the second-to-last play of the third quarter Thursday against Ohio State, when he ran to the right side for 1 yard and tried to escape a tackle by safety Ronnie Hickman. After Ibrahim planted his left foot, slow-motion replays on the Fox broadcast showed his leg react as if something had popped inside.

Ibrahim gave the Gophers the lead with his touchdown runs and set up their first score with a 56-yard run on fourth-and-1 from their own 29. They were ahead 21-17 with 5:20 remaining in the third quarter before the Buckeyes pulled away for good.

Fortunately for the ground-oriented Gophers, running back has long been one of their deepest positions. Treyson Potts (third year), Cam Wiley (third year) and Bryce Williams (fourth year) are next in line for carries.