(ABC 6 News) — For Golden Gophers fans in downtown Rochester, they were in for a great time.

The University of Minnesota is bringing its Coaches Caravan back throughout the state after a two-year absence and stopped by the Med City on Tuesday.

"He just qualified for the world — at the U.S. Open — for the world team trials, which was this past weekend," Eggum said. "So, he put himself in an elite group in the United States and he did an amazing job, he continues to get better. I’ve talked about Michael a lot last year, he’s a guy that is capable of winning a national title. And so, it’s a fine line of having success at the highest level, no question about it, but he’s a big part of our program. So, we’re excited to have him for another year and to watch him go out and compete."

Coach Fleck gave credit to Rochester native and John Marshall grad Darrell Thompson. Fleck recognized Thompson’s impact on the team as a radio analyst and how the current running backs on the roster have a standard to reach. 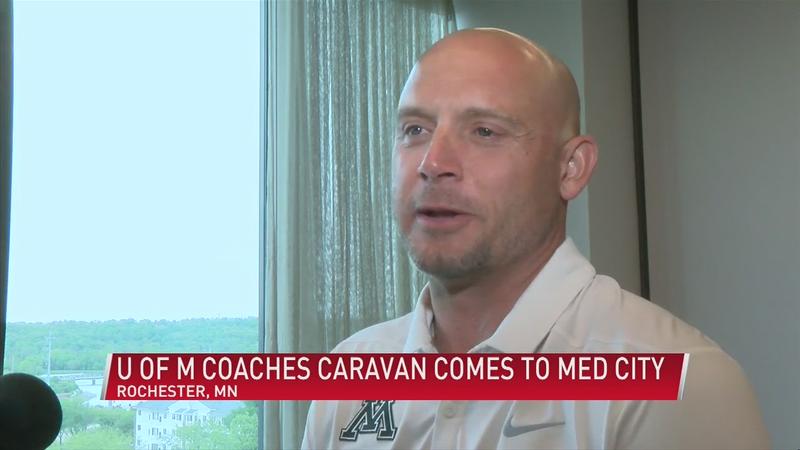 "I can’t tell you how much D.T. means to the Gopher program and Gopher football and I just love having him connected to our program, right?" Fleck effused. "Being on, you know, the radio every Saturday and doing his tv stuff. I mean, he’s what Gophers football is all about. And hopefully, one of these running backs can break all of his records at one point. I know — I’m sure he wants that to happen somewhere, maybe not down deep. Somewhere, he wants to keep his records but, hopefully, we can find a way to be able to break some of those."

The Coaches Caravan will make two final stops in both Stillwater and Brainerd on June 6 and June 20 respectively. Men’s hockey coach and Austin native Bob Motzko will be present on both of those days. Men’s basketball coach Ben Johnson and women’s basketball coach Lindsay Whalen among others will also be at Stillwater.