(ABC 6 News) – MercyOne North Iowa has reached a big milestone in its time with robotic surgeries.

The Mason City medical center is celebrating ten years of robotic surgery. Dr. Roberto Velez has completed over 500 robotic surgeries in about 9 and a half years at MercyOne.

"It’s basically the ability to do more to some degree with less assistance because you’re controlling those instruments. So everything is more precise, you don’t need to have somebody holding the camera for you," Dr. Velez said.

The biggest advantage of robotic surgeries is that they are less invasive and the recovery is easier. 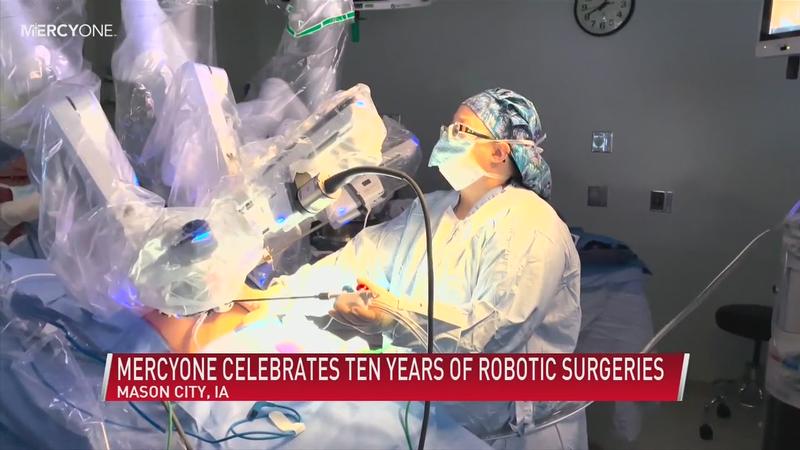 "It’s not inventing any new surgeries, he said. "It’s doing existing procedures by using a tool that is obviously significantly more advantageous in many ways."

The most common surgeries done robotically are hysterectomies and prostate procedures.

"It was probably one of the easiest things I have ever been through," patient Caitlyn Sittig said.

Sittig had a robotic hysterectomy done at MercyOne North Iowa in October by Dr. Velez.

"I wasn’t really sure what to expect. I had been told anywhere from six to eight weeks of recovery and I was ready to go back to work within two days. I just felt really good afterward," she said.

Robotic surgeries are not Artificial Intelligence (AI). The surgeon is 100 percent in control during the procedure. The surgeon just uses the robot instead of their hands.

This was Sittig’s first robotic surgery and she said she had a good experience. The opposite experience of her friends that had hysterectomies done in the past six months. They were not done robotically.

"Their recovery time has been far more. And I said to them going into it ‘You guys this is going to be the best thing you’ll have ever done. You’ll be ready to be back to work within less than a week.’ And here they are six to eight weeks later and still struggling."