(ABC 6 NEWS) – An Albert Lea boy is the talk of the town! This week, he received $10,000 from Hormel Foods and Planters for doing a good deed.

Riley Flatness is on a mission, he wants to make a difference in people’s lives. He wanted to give back to a soldier and it paid off in more ways than one.

"I thought this has to be fake," Riley Flatness said.

Riley flatness is still in shock about winning 10 grand, but he earned it.

At this Taco Bell, Riley saw a soldier in line waiting to order his food. He told his mom he wanted to pay for a soldier’s meal, all by himself. 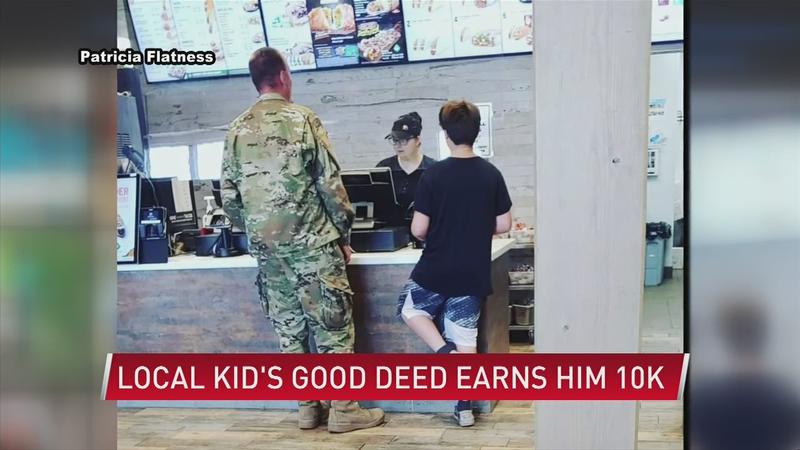 "I did it because I felt like it was the right thing to do and my parents taught me how to be nice," Riley Flatness said.

Soon after they left, Riley’s mom Patricia took to Facebook saying "Riley may be a jokester, he may have a booming voice, may be full of energy, but his heart is one of a kind."

She’s proud of her son.

"I took a picture of him because it was really cool and special. It acknowledges and it shows it’s nice to do good things for no reason," Patricia Flatness said.

And it was only a matter of time before people noticed Riley’s good deed, including Natalie Brigham with the Planters Nutmobile.

She says they have been giving out $10,000 dollar checks to organizations and people throughout the state for their acts of substance in the community!

Riley is the third Minnesotan to receive a check from Planters and we have the surprise on tape.

"At first I thought it was a joke, or like a scam," Patricia Flatness said.

Despite the doubts, the Nutmobile showed up at his home.

"It also makes you aware of the random different things that people do it makes you acknowledge it a little more and be thankful for that especially with how these days are with how much stuff going on so little good with all the bad at that’s nice," Patricia Flatness said.

A huge congrats to Riley, keep up the great work!

As for the 10 grand, Riley says he plans to donate some of it to help his school update its playground.

He also says he wants to plan a pizza party for all of their fifth graders at Hawthrone Elementary.