Local government waits on movement from the Minnesota legislature

(ABC 6 News) – With the Minnesota legislative session wrapping up just over two weeks ago, agencies in Southeastern Minnesota are still left wondering if, and when the legislature will reconvene to divide up the state’s massive budget surplus. Olmsted County says they have projects that desperately need the money.

County Commissioners are waiting on a transportation finance bill and a bonding bill. Both of which, lawmakers expected to pass during the regular session, but did not quite make the deadline.

Now the county is short $10 million to build an exhibition center at Graham Park, around $17 million to fix a dangerous intersection along Highway 14, and around $10 million for a recyling facility.

"We’ve been working on it for years. It’s a very very dangerous intersection. People should be generally upset and talking to their legislators and say, you know, get the job done," said Olmsted County District 2 Commissioner Ken Brown.

Before the session ended lawmakers agreed to spend $450 million on public safety. But discussions still have not shed light on how they plan to spend it. The Republican-controlled senate bill directs money to recruiting and retaining peace officers, which the Olmsted County Sheriff says his department is struggling with. 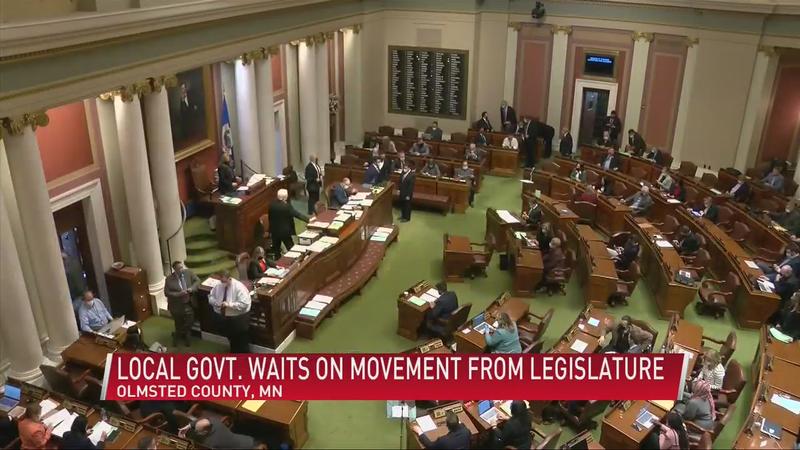 "A lot of discussion about recruitment and bringing new officers in. We support that. New people that would be interested. But it’s been really hard to sell that side of it. If there are changes we’d like to see them so we can get to work on those things too," said Olmsted County Sheriff Kevin Torgerson.

The legislature agreed to put $1 billion towards health and human services, but were not able to pass that bill either. The bill, authored by Rochester Representative Tina Liebling, would dedicate money to solving the local healthcare and child care worker shortages.

House and Senate leaders have been in meetings these past two weeks to try and reach a compromise on the specific spending plans for bills like public safety, health and human services, and transportation.