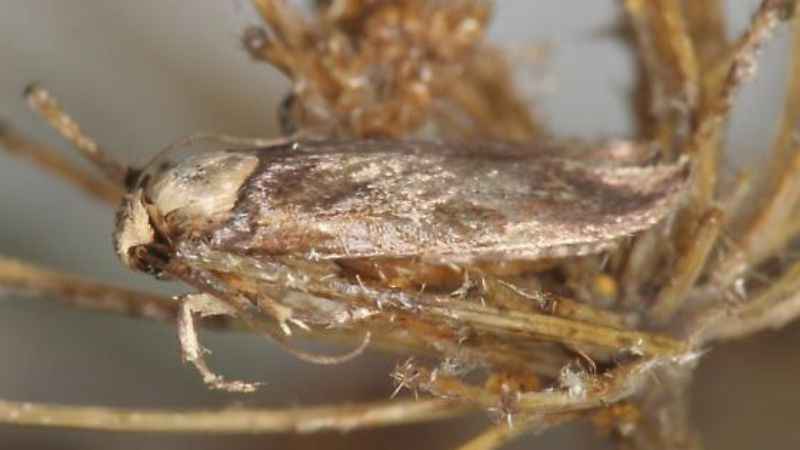 (ABC 6 News) – The purple carrot-seed moth (Depressaria depressana), an invasive insect that feed on plants in the carrot family, such as dill, fennel, and coriander, has been found for the first time in Minnesota according to the Minnesota Department of Agriculture (MDA).

A resident near Stillwater first noticed the insect on their dill plants and reported it to the MDA. A second report from Montgomery, Minn. came in a few days later. With help from the University of Wisconsin Diagnostic Lab, scientists were able to make the identification from photos.

The moth is native to Western Europe, Russia, and China. It was first discovered in North America in 2008. It has been documented in southern Canada, Michigan, Indiana, and Illinois. Most recently, it was discovered in Wisconsin in 2018 and Iowa in 2020.

“The impact of this insect is currently unknown, but because it is associated with the flowers and not the roots of plants, impact on carrots, celery, and parsnip crops should be minimal,” said Angie Ambourn, Supervisor of the MDA’s Pest Detection Unit. “Crops that are commonly grown for seed, like fennel, dill and coriander, might be where we see the greater impact.”

Purple carrot-seed caterpillars are dark and distinctive and can be green or reddish with many white spots on their bodies. The caterpillars feed on the flowers but they also tie the floral parts with webbing and can make herbs like dill unusable.

The caterpillars pupate in the webbing and emerge as small purplish-grey adult moths a short time later.

Since this is the first reported discovery of the purple carrot-seed moth in Minnesota, the MDA would like to better understand where this insect may be in the state and how big of an issue this is to local gardeners.

Residents can report suspected purple carrot-seed moth to the MDA’s Report a Pest line by visiting www.mda.state.mn.us/reportapest or calling 1-888-545-6684. Please include clear photos when submitting a report.

Find photos of the insect HERE.