(KAAL–TV) — Fresh off an intense first day of grappling during the 2022 MSHSL State Wrestling Championships, individual competitors began their pursuit for the title picture.

A total of 56 southeast Minnesota athletes entered the Xcel Energy Center aiming to keep their individual records alive for Saturday, including Grady and Kail Schott of Chatfield High School. The former would pin LGPEB’s Tate Twardowski to move to Saturday, however, Kail Schott would lose 8-0 to Kimball’s Ashton Hanan.

Elsewhere, Lathan Wilson, the lone Austin Packer in the Tournament, came up short against St. Michael/Albertville’s Landon Robideau. Robideau pinned Wilson a minute and 41 seconds into the match as Wilson would later defeat Rosemount’s Liam Anderson in consolation action.

Meanwhile, undefeated Byron Bear Maxwell Petersen easily took care of business Friday. The 145-pounder and a favorite for Saturday pinning both Mahtomedi’s Evan McGuire and Zumbrota-Mazeppa’s Kaleb Lochner in under two minutes each.

As for Mayo’s Calder Sheehan, his bout with Maple Grove’s Max Johnson required sudden-death overtime. Sheehan tried to resist but Johnson was ultimately able to score a takedown on Sheehan, advancing to the semifinals. 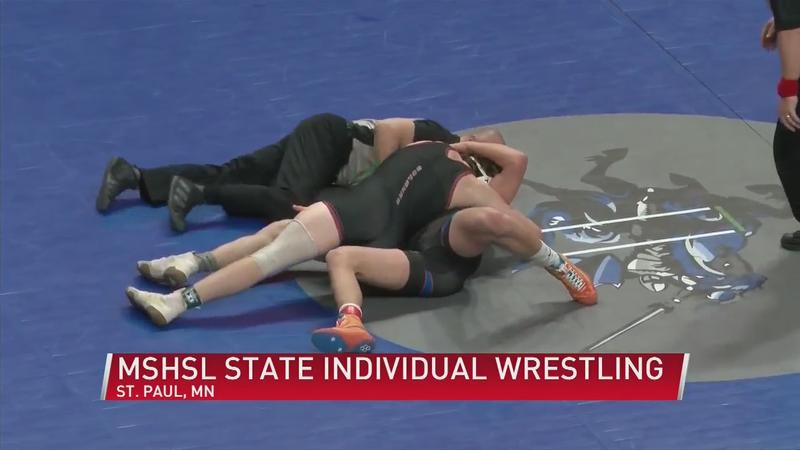 St. Charles’ Jett Thoresen had a massive task on his plate during Friday’s matches. A year ago, he fell to LGPEB’s Landon Gode, who is a two-time state finalist. Thoreson would not be denied this year as he got both a textbook and personal victory, winning 10-5 to wrestle on Saturday.

In addition to Thoresen, Tytan Small and Noelle Barclay are the only Saints representing St. Charles High School this weekend at the State Championships.

Saturday will see if Thoresen, Small and Barclay can all bring home hardware as all title matches plus the entire girls tournament begin at 9 AM at the Xcel Energy Center.