(ABC 6 News) — The Hutchinson Tigers proved to be too much in the Class AAAA Championship for Kasson-Mantorville last season. But in head coach Joel Swanson’s eyes, it’s how his young men handle defeat that defines KoMets football’s legacy.

"It’s all about can you get yourselves up?" Coach Swanson said Wednesday. "It’s like today is a tough practice, it’s the middle of the week, you’re sore, you’re tired. Just like in the game of life, something happens that’s a negative consequence, how do you respond after that?"

Following a season in which they ran for nearly 4,000 yards on the ground, the KoMets need to replicate offensive productivity following quarterback Matthew Donovan’s senior campaign.

As for Barwald himself, the fullback has been, "looking to get a little faster, get stronger and just put on more weight. I want to try to get 10 pounds on me before we start the season." 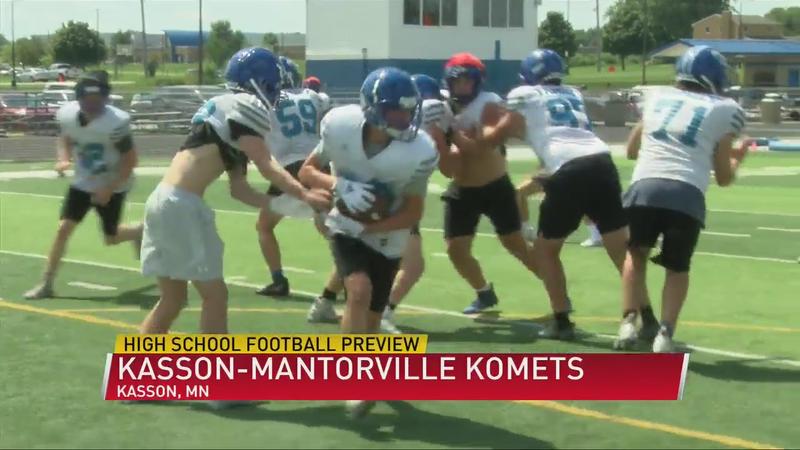 Kasson-Mantorville’s defensive core is mostly intact, and it is at the line where things should be interesting with 315-lb lineman Reese Tripp on both sides of the ball.

"[He] just clears everything up," Barwald agreed. "He’ll be getting double-teamed and that’ll take people from other spots and open up more plays for us."

Overall, there’s faith that State is always within reach for K-M, and when the unexpected happens, the durability of this team both mental and physical will play a key role in 2022.

"Last year, we thought these five guys were going to be starting and then all of a sudden, you got injury, injury, injury…" Coach Swanson discussed. "We got to help out the next guys ’cause they’re the next guy up. It is a team thing and you’re going to need every one of your buddies along the way…"

Kasson-Mantorville’s first game of the season is at Byron on September 2 at 7 PM.