(ABC 6 News) – U.S. Senator Amy Klobuchar visited Rochester Tuesday to highlight a program called "Save Our Stages" which is dedicated to saving venues struggling during the pandemic.

"This is a day where we say the music and the theatre will continue," Klobuchar said.

During a non-pandemic year, the arts produce about $2 billion across Minnesota. Those who joined Sen. Klobuchar Tuesday have found ways to serve the people of the communities of Rochester, Lanesboro and Chatfield thanks to this federal funding. Klobuchar made her focus of this bill to cover not only the mid-size and larger venues but some of the smaller ones as well.

"It is truly remarkable that this country has reached out to support the arts in such a strong and capable way," Hal Cropp, Producing Artistic Director at the Commonweal Theatre Company in Lanesboro, said.

Part of the bipartisan pandemic relief bill, this funding covers everything from museums to theatres to movies. It has provided 220 Minnesota venues with financial assistance since the start of the pandemic. 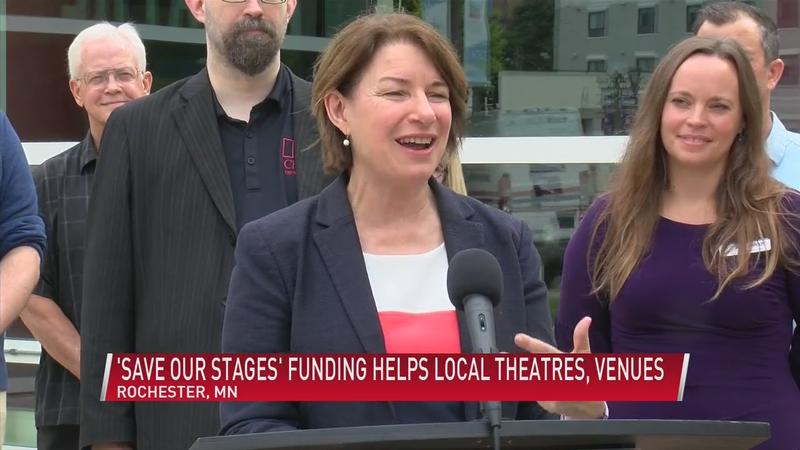 "So now because of the ‘Save Our Stages’ grant funds, we’re able to announce a full season. Our box office is actually open," Misha Johnson, Interim Managing Director at Rochester Civic Theatre, said. "It is so important, especially during times like this, that we are so thrilled that live theatre is back, we’re here to stay."

From canceled shows to furloughed staff, the Rochester Civic Theatre lost about $540,000 during the pandemic.

"We scrambled to keep revenue coming. That’s thousands of tickets worth of capacity that we had to cancel or postpone indefinitely, we didn’t know what was going to happen. March, April, May, June, July," Mike Speck, Operations Director for Chatfield Center for the Arts, said.

Klobuchar wants to make sure everyone is going to have a seat at the theatre.