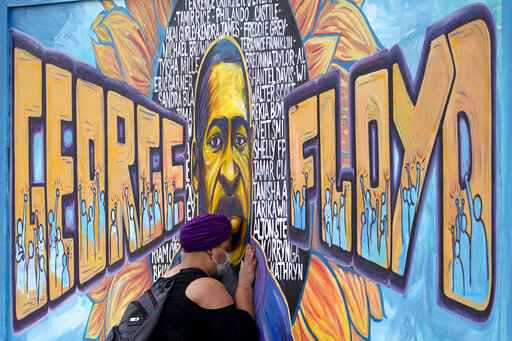 AP. FILE - In this April 23, 2021, file photo, Damarra Atkins pays her respects to George Floyd at a mural at George Floyd Square, in Minneapolis. A fund set up to honor George Floyd says it has awarded more than $50,000 in scholarships since it was created. The George Floyd Memorial Foundation says Monday, Sept. 13, 2021, that it has recently given scholarships to 15 law school students, (AP Photo/Julio Cortez, File)

HOUSTON (AP) – A Texas agency has approved a request that George Floyd be granted a posthumous pardon for a 2004 drug arrest made by a now-indicted ex-Houston police officer whose case history is under scrutiny following a deadly drug raid.

Monday’s unanimous recommendation by the seven member Texas Board of Pardons and Paroles to grant the pardon will now be forwarded to Gov. Greg Abbott, who will make the final decision.

A spokeswoman for Abbott hasn’t returned an email seeking comment. An attorney with the Harris County Public Defender’s Office who submitted the pardon request in April says she’s pleased by the board’s decision.